Where the Volga flows

Volga – Europe's largest river. It begins in the Valdai hills and flows into the Caspian sea, forming a Delta with an area of 19 thousand square kilometers. Length of the Volga is 3,530 km. 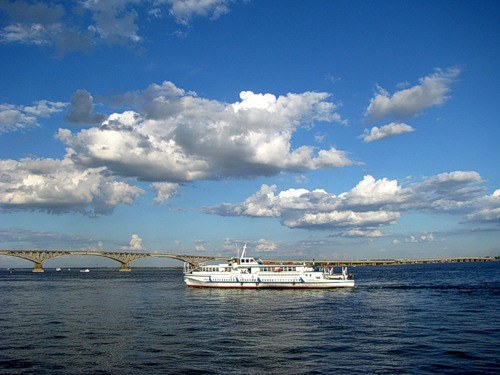 Related articles:
The ancient name of the Volga – RA. And in the middle ages it was called ITIL as the capital of the Khazar khanate, lying at the mouth of the rivers flowing into the Caspian sea. Starts the Volga river in the Tver region in the Valdai hills, at a height of 228 m (the mouth is located 28 m below sea level) and flows into the Caspian sea in the Astrakhan region. Flowing Volga from Tver to Astrakhan through the largest cities of Russia: Yaroslavl, Kazan, Samara, Saratov and Volgograd. It has about 200 tributaries, the most significant of which Kama and Oka. The pool Will be located a well-known wildlife reserves, natural national Park Samara Luka, Volzhsko-Kamsky, Zhigulevsky, Astrakhan.The nature of the flow of the Volga is divided into the Upper (from the source near the village Volgo-Verkhovye to G. Shcherbakova), Medium – to the mouth of the Kama, and the Lower one to the mouth in the Astrakhan region. The largest river is the hydroelectric power with reservoirs: Ivankovo, Uglich, Rybinsk, two of the Volga, Saratov. The Volga basin occupies one-third of the European territory of Russia from West to East – from the Valdai hills and Central Russian to the Urals. River system (total length of 574 km) includes 151 000 watercourses (rivers, streams and temporary streams). In the district of Saratov, the river narrows and flows on without tributaries.The main part of the Volga river from source to Kazan is located in the forest zone; the middle part – in the forest-steppe and lower – in the steppe and semi-desert.The Volga Delta (the largest river Delta in Europe) starts from the place of separation of the sleeve Buzan, the mainstream of which is 46 km North of Astrakhan, which is the largest river in the territory of the Russian Federation. In Delta there are about 500 of ducts, sleeves and small streams. The main branches of the Volga are Bekhtemir, Staraya Volga, Buzan and Akhtuba.
Is the advice useful?
See also
Присоединяйтесь к нам
New advices