Where to go to the sea

Vacation on the sea coast – one of the most popular types of recreation. Warm sun, refreshing breeze filled with the intoxicating aromas, clear waves lapping on the shore and the sand crunching under their feet – this is the surroundings of a seaside resort. Opportunities for beach vacations now unlimited, in any season of the year. Before the tourists gets only one dilemma – what is the sea to choose for a long-awaited trip. 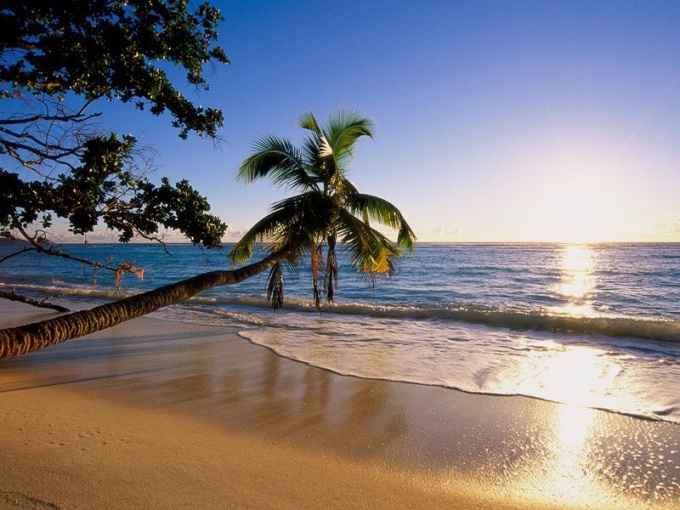 Related articles:
The sea is not only a great way to change the situation and buy a chocolate tan. The sea is also the natural "medicine". Holiday on the coast will strengthen the immune system, facilitates the course of chronic diseases. The planet has more than four dozen sea. However, favourable for a comfortable rest of them not so much. The most visited are the Caribbean, Black, Red, Caspian, South China and Mediterranean seas. Each of them has its own characteristics. Choosing the sea for relaxation depends primarily on the time of year. In summer it is better to relax in the resorts of the red, Mediterranean and Black sea. Vacation in the cold season it is better to spend on the Caribbean and South China seas.Most resorts are concentrated on the Mediterranean coast. Here are the resorts of Greece, Spain, Croatia, Italy, Turkey, France, Tunisia. A big plus of holidays on the sea is well-developed infrastructure. Among the disadvantages – the unbearable heat in the peak tourist season and a large number of tourists. The climate is humid, with a fairly long dry summers.The red sea refers to the inland seas. It belongs to the Indian ocean and lies between Africa and the Arabian Peninsula. Its waters abound with minerals and algae. Just after the first swim it decreases swelling and improves lymphatic flow. And the air near this sea is saturated with bromine vapors, which have a beneficial effect on the nervous system. A few days after I had breathed in this air, you will calm down and fall into a state of relaxation. The climate on the greater part of its coast – tropical desert. Just to the North of it can be attributed to the Mediterranean climate. In addition, the Red sea is a Paradise for diving enthusiasts. This is the best place in the Northern hemisphere to dive into the depths. Among the disadvantages of this sea – high salinity of its waters. In a duet with the summer heat it can be a barrier for people with heart conditions. High humidity of air keeps the searing heat even after sunset. A popular resort of the red sea is Egypt.Black sea belongs to the basin of the Atlantic ocean. This is the inner sea washes the shores of several countries, among which Romania, Russia, Turkey, Ukraine and Georgia. Its water is rich in hydrogen sulfide, which makes the air extremely useful. In the resorts of the black sea feel comfortable even people with cardiovascular diseases. The only negative - in the summer they can stand the intense heat. The most popular Black sea resorts are Sochi, Gelendzhik, Yalta, Alushta, city of Bulgaria.Very popular is the Dead sea. Its unique mineral composition competition. The reliable, strong salt fumes, the local air helps to tolerate extreme heat. But there are shortcomings and this sea. If you like an active beach vacation, the Dead sea is not for you. Here eat mostly treatment. The clinic, located on the coast with success to treat many ailments, including psoriasis and asthma.Dominican Republic, Cuba, Puerto Rico, Jamaica, Barbados is only a small fraction of the resorts located on the Caribbean coast. They come here on vacation true connoisseurs of the exotic Paradise. Gentle turquoise waters, boil-and-white sand beaches, tropical nature, the flavor of the locals are all relaxing on the Caribbean coast. But here, the fly in the ointment has not done. The cost of tours is the sea a bit more expensive than the same Red sea, but it is really worth it.
Is the advice useful?
See also
Присоединяйтесь к нам
New advices