How to crochet pictures

Fans of multi-color jacquard knitting know what is hard work is to perform knitting a complex pattern, stretching the threads from the inside of the parts. To the product turned out neat, takes a long time to practice. Beginners are advised to start "drawing" threads with normal, and then - Tunisian hook. Sort of thing is easier to master, and the result is pretty spectacular painting. 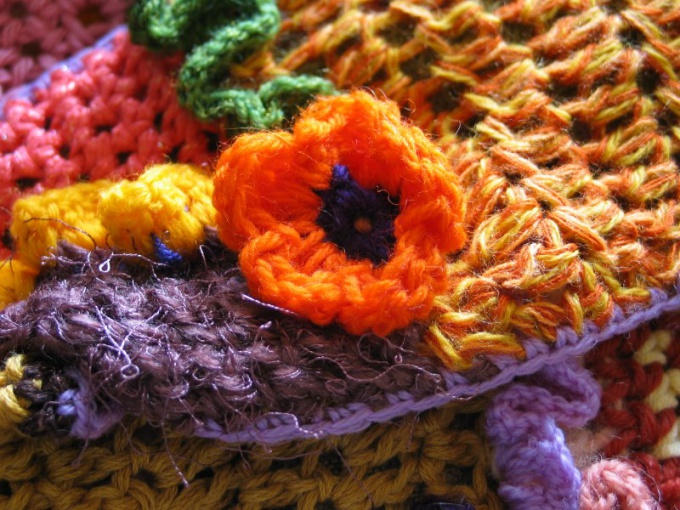 Related articles:
You will need
Instruction
1
Pick up two rolls of worker threads of different colors and draw on the checkered notebook sheet pattern to knitting crochet. Each cell will correspond to one column. Can use two-color scheme for loin knitting or cross-stitching.
2
To start, try to do a hook on a small product, for example a square potholder. One of the simplest patterns - squares, arranged in a checkerboard pattern. It is important to learn how to make neat transitions from one color to another.
3
Make the aircraft a chain of 29 links and start knitting the first row. The yarn from the ball of the same color can be called by thread # 1, other colors – thread No. 2.
4
Follow these 7 columns without nakida of thread No. 1. When the hook will be only two loops (main and thread the loop from the last nadopasana column), this pair should knit into the already thread number 2.
5
In the manufacture of the next 7 columns capture crochet thread No. 2.; the last loop of the figure necessarily provarite yarn of a different color (again, No. 1). If this is not done, the transition from one business to another ball will be fuzzy – there will be two-tone column.
6
Continue to knit pattern crochet, holding the loose thread on the edge pigtail - edge work. On top of it will be tied to the working yarn. Thus, the broach will be included in the canvas. Lay it so that in no case do not pull the knitting.
7
"Draw" knitted pattern until the canvas will rise by 7 columns. Then change the thread places the squares on the potholder will change colour. When moving from one row to another, always make lifting a loop of thread of the color from which you will run the initial column.
8
When you learn the technique of knitting pattern conventional crochet, try to perform the so-called Tunisian canvas in different colors. To do this, take a long hook with a special delimiter.
9
Each series ("knitting in the set") will be performed in two stages. First, link chain loops, and then from all parts of vivacite on a vertical loop (stage 1). Make a horizontal chain of loops: pull the working thread through the first loop the first open row, then through 2 loops. Continue in pattern until all loops are closed (2nd stage).
10
A number of Tunisian knit, thus, consists of elongated and horizontal "tracks". Before vyazaniem ornament refer to the diagram on the paper. Each cell is 1 an elongated vertical loop, and each row of the pattern is 1 row of Tunisian crochet (both its stages).
11
Try to knit a long hook on the pattern. Type of loop, sequentially alternating threads of different colors according to the template (stage 1). During promazyvanija horizontal "track" (stage 2) repeat pattern of vertical loops.
12
The Tunisian knitting is carried out only from the "face" of the product, so outside the thread you want to tie on the reverse side. To broach lay neatly, cross free yarn with a working (as in working on the spokes).
Useful advice
To Tunisian cloth didn't look too thick, choose a small pattern of two colors. Normal hook allows you to make the palette more varied, while the canvas from the bars turns the same on both sides.
Is the advice useful?
Присоединяйтесь к нам
New advices