How to quickly learn French

If you took up the study of French language, get ready for daily hard training – but this tactic will bring success. Seven hours per week spent on exercises and the memorization of words will allow you to have a few months to read simple texts and communicate with native speakers of the language. 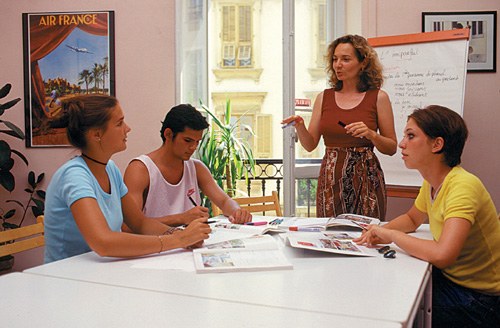 Related articles:
You will need
Instruction
1
If you are interested in spoken language, focus on the correct pronunciation, the study of the structure of sentences and vocabulary. The nuances of grammar, the intricacies of spelling and verb forms used only in written speech, you can leave for later.
2
Starting to learn the language from scratch, sign up for courses. Select a small group – ideally from 4 to 8 people. Group work will be a good incentive – you will constantly compare yourself to other students and try to keep up with them. Besides, many times repeated and monitored verbal constructions are best remembered.
3
Do not try to find courses, where he teaches medium of language. The beginner is better to work with a Russian teacher who can explain language nuances. If you want to improve pronunciation, do not interfere with classes with teacher-French – but not earlier than six months after the beginning of the study of language.
4
Exercise daily for half an hour, but better for an hour. In between visits to language courses train at home – just memorize words, write a short dictations, read texts aloud.
5
Studying a time limit to four the most common in modern language. For oral communication and reading Newspapers and magazines is enough to learn the present, simple future, past perfect and imperfect. If you want to read unadapted books are French classics, to take the simple past, which is practically not used in modern language.
6
Increase your vocabulary. French learn nouns together with the article indicating the genus. Write words on cards that you can carry around and browse at every opportunity. Pay special attention to the verbs and prepositions that are required to manage them. Memorize the irregular verbs in all temporal forms. The peculiarity of the French language that irregular verbs are the most used.
7
If your city is the French cultural center, be sure to sign up. The center employs the best language courses of different levels, where you can take the examination on language proficiency and receive a certificate. Besides, the centre has a library and a film library, hosts events and meetings with visiting French.
8
Watch movies in French - immersion in living it is very stimulating study of the language. Choose pictures with French subtitles – so you can not only hear words, but also to correlate them with their writing. But subtitles will not bring much benefit – fascinated by the story, you just don't listen to French speech.
Is the advice useful?
See also
Подписывайтесь на наш канал