How to cook porridge oats

Oatmeal is one of the most useful for children and adults. It contains a lot of protein, vegetable fat and mineral substances. Usually oatmeal porridge, boiled cereals, but cereals can cook a great nutritious Breakfast. 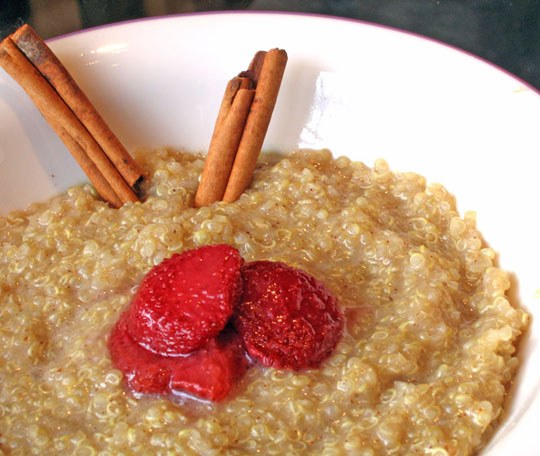 Related articles:
You will need
Instruction
1
Porridge from oat groats can be cooked whole in water or diluted milk. You can also use evaporated, condensed or powdered milk, diluted with water and the cream. Diet porridge boiled in plain water without adding milk.
2
Because oat groats – whole grain, you need to consider that in the milk it will swell and reach readiness is slower than in water. Therefore, it is recommended to tenderize in the water.
3
Try oatmeal, wash it in several waters and cover with boiling salted water, leave to swell for 3-5 hours or overnight. You can do it without pre-soaking grains: add enumerated and washed the oatmeal in boiling water, remove the pan from the heat, cover and leave for a while for the swelling.
4
Swollen rump drain in a sieve to drain the water. Then put it in the boiling milk, add salt and cook for 20-30 minutes on low heat until thick. Porridge needs stirring from time to time and to do it slowly because rapid stirring slows down the cooking.
5
In the finished porridge add the butter. You can serve it with fruit, raisins, prunes, nuts, etc. sweet Lovers can refuel porridge with sugar, cinnamon or jam to your taste.
6
Another way of cooking porridge of oat groats is as follows: soak cereal in 2-2,5 volumes of hot water, leave for 3-4 hours. Cook porridge in the same water and put to aprivate in a warm place. Porridge from oat groats require more time to uprawiania in comparison with other cereals. The thus prepared porridge add butter and cream.
7
Porridge from oat groats can be included in the diet of those who want to lose weight, because it has a high nutritional value and low calories because of the low content of starch.
Is the advice useful?
See also
Подписывайтесь на наш канал