How to give "Her" babies

This has a rather unpleasant taste of the drug as "Suprastin" it is quite difficult to persuade to adopt a child not only preschool, but even school age. In that case, if he was appointed for the baby, the parents have several questions. How to divide a pill and follow the dosage, and of course how to give "Her" baby. 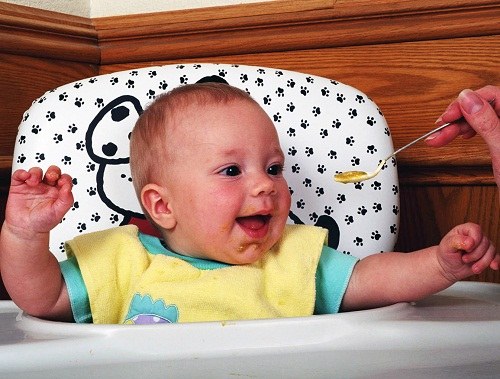 Related articles:
You will need
Instruction
1
Grind the pill between two spoons. Depending on the dosage in a small mug or glass, pour the right amount of teaspoons of pre-boiled cooled water and add "Suprastin" in the form of powder. For example, if the stated purpose of 1/6 of a pill, add six tablespoons water, if using half a pill, three spoons. Gently stir until the powder is fully dissolved.
2
Add the medicine in half of the prepared mixture or a small amount of expressed breast milk depending on what you are going to feed the baby.
3
Place the baby in her arms so his head was slightly raised, and start to feed him. After he eats about half of his usual serving, give him a bottle with the mixture (breast milk), which was added to the medication.
4
If you are going to feed the baby fruit purees, seat him at the kids ' table, or sit on his lap.
5
If the baby refuses to eat, try to gently push on his chin or gently squeeze his cheeks to open his mouth. Carefully pour into the mouth a teaspoonful dissolved in water, "Suprastin", then be sure to ask the baby a bottle with warm boiled water. Try to inject the medication as close to the root of the tongue, since there are no taste buds. Instead of a spoon you can use ordinary syringe.
6
In that case, if a child's diet has already introduced a fruit puree, add a solution of the medication in him. In this case, unpleasant taste "Suprastin" will be less pronounced.
7
If the baby spit up the medication in 10-15 minutes after taking it, give it to him again in the same amount. Do not exceed the prescribed dose to avoid overdose. If you notice disturbing symptoms, e.g., psychomotor agitation (up to the waving hands and feet), cramps or lethargy, be sure to call the district pediatrician or an ambulance.
Note
Remember that to use diluted in water "Suprastin" only once, as it cannot be stored.
Is the advice useful?
See also
Присоединяйтесь к нам
New advices