How to determine the gender of fish-parrot

The parrot-fish is a popular denizen of home aquariums, has received its name due to the fact that her front part of the head with a sloping forehead and a small mouth resembles the beak of a parrot. These fish are active and undemanding, can make a game, it gained the love of aquarists. If you want to breed parrot fish, you should be able to determine their gender to get the male and female. 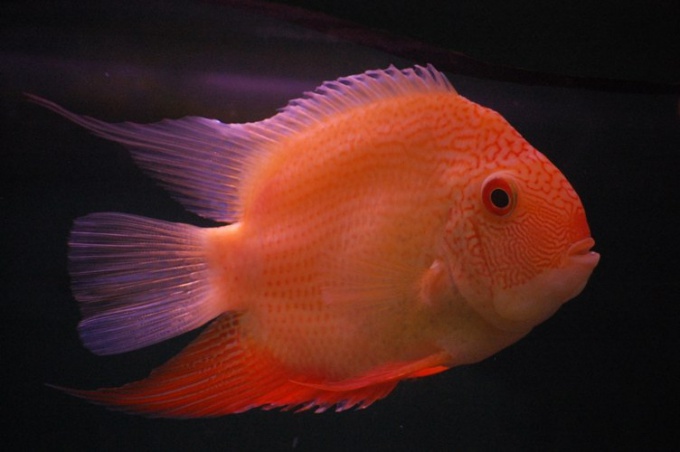 Related articles:
Instruction
1
The most frequent guest in aquariums is the red parrot. This beautiful fish can be red, orange, and lemon colors. After a period of adaptation she's getting to know the owner and even trying to communicate with him through the front wall of the aquarium.
2
To distinguish males from females in this type of fish is not easy, sexual dimorphism, they have expressed not clearly. It is best to determine the sex of the fish, upon reaching puberty, which occurs around the age of one and a half years.
3
Unlike most fish, the male fish parrot larger than females. In addition, color in males is brighter and richer than the more faded the females.
4
Note the tail fin of a fish-parrot. In females the ends of the fins are more rounded, while the ends of the fin in males is pointed.
5
Fish-parrots choose a permanent couple, so don't plant out or sell fish that have reached puberty and decided on the choice of a partner.
6
Before spawning fish-parrots make a shelter, digging preventing them from algae. If you value the landscape in your aquarium, it will be better if you ask the fish spawning grounds. Put a narrow stone at an angle of 45 degrees near the spray of the compressor. If you noticed that parrots began to clean the stone, then you have prepared a place they liked.
7
To from eggs hatched the fry, need to replace ten to fifteen percent of the water distillate, and to lower the pH to 6.8.
Note
Red parrot – farmed hybrid, so many males sterile. Unfortunately, there is no way to determine when buying Pets.
Useful advice
Fish-parrots are famous for their bright color. However, juveniles born to a nondescript gray. Bright color they acquire months to five.
Is the advice useful?
See also
Подписывайтесь на наш канал