How to make a sound analysis of the word

In order to carve out a sound analysis of the word, you must first know what the sounds are different from letters. The sounds we utter and hear, in the letters you see and write. 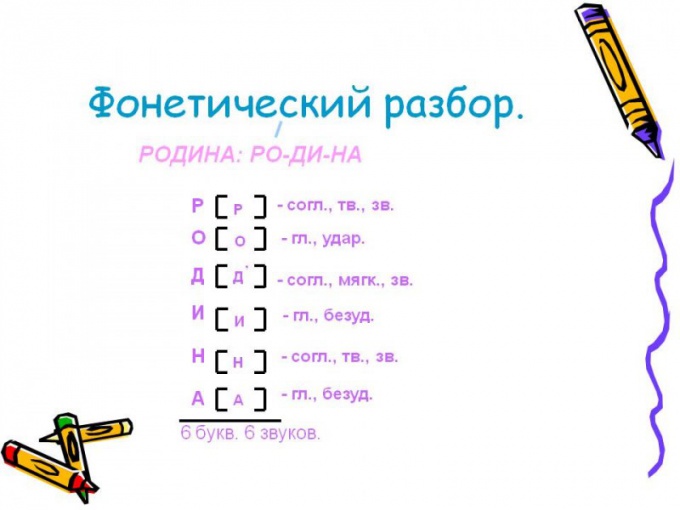 Related articles:
Instruction
1
Write down the phonetic transcription of the word – a written designation of its sound. To do this, first say the word out loud. Here it is important to determine the number of letters and sounds, as their ratio in words often don't match. This is due to pronunciation of words when some letters may be missing in the audio part (for example, words with double consonants pronounce only a single sound) or sounds that are not indicated by letters occur in speech (e.g., the letters I, e, e, s contain two sound: I [ya], e [yo], e [yeah], Yu [Yu]). In addition, often the same letter represents different sounds. For example: house [d m] - house [of d a m a].
2
Determine the number of syllables per word and the position of the stress. You need to know some features of bloodline. In a word as many syllables as there are vowels, since consonants are not slovoobrazovanie. The syllable can be formed with only one vowel sound. If it consists of more than one sound, it starts with a consonant. At the same time, if the syllable has two consonants, as a rule, both are adjacent to the subsequent syllable. With the exception of cases in which one or two adjacent consonants are sonorae sounds ("R", "l", "m", "n", "y"). Then the consonant is adjoined to the preceding syllable.
3
Perform the analysis and description of each sound that is part of the parsed words. Determine what sound each letter represents. Vowel sound is estimated as impact or non-impact. Consonants are treated as voiced, or conomie deaf, hard or soft. The consonants also are described as paired or unpaired.
Note
Written sound analysis of words used certain graphic signs. So, the sound is enclosed in brackets ([ ]), a letter is quoted. The softness of the consonant is indicated by the apostrophe (‘).
Is the advice useful?
See also
Присоединяйтесь к нам
New advices