How to sew Spanish skirt

Spanish dance has never lost its popularity. The perception of their audience is largely determined by the sumptuous costume in the first place - the famous Spanish skirt with flounces. It is so lush that the performer can, holding his fingers over the hem, raise the arms above the head. And the skirt will still seem long. To sew Spanish skirt in several ways. 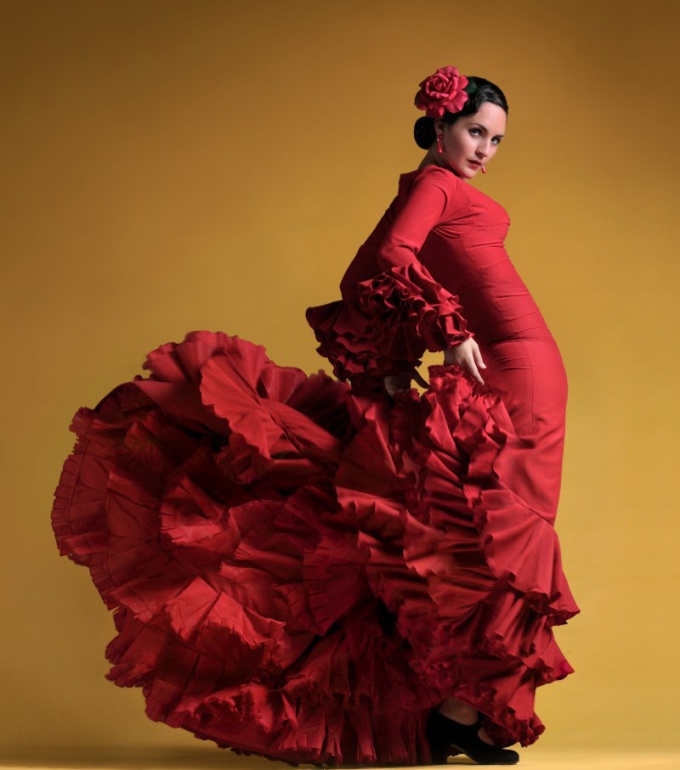 Related articles:
You will need
Instruction
1
Spanish classical cut skirt. Wedges should not be less than six. This manufacturing method allows the dancer not only free to perform the movement, but also emphasizes her figure. Start with taking measurements. You need to know the length of the product, the distance from waist line to the hip line, the girth of waist and hips. To the standards of the girth, add 1 cm free customized fit. Determine how much you want to make ruffles, as well as their intended width.
2
Build the pattern on graph paper start with a vertical line. For convenience, cut a piece of graph paper by 20-25 centimeters greater than the length of the product. Lay the sheet vertically and approximately in the middle draw a vertical line. Subtract the length of the product width of the bottom ruffles. The resulting measure put down from the waist line. Through the obtained point do another horizontal line in both directions from the centerline. From the waist line you need to put one more measurement - the distance between the lines of the waist and hips. Through this point also draw a horizontal line.
3
Divide the girth of the waist and hips on the projected number of wedges. The best option is 6, but may be 8, 10 or even 12. Divide these measurements by 2. The measurements are put respectively on the lines of waist and hips in both directions from the centerline, which represents the middle of the wedge. Connect pairwise the points obtained. The line should be slightly curved, the convex part facing away from the center of the skirt. Both lateral lines construct perpendiculars at the points of their intersection with the line of the hips.
4
To build the lower part of the wedge, measure the distance between the lines of the hips and bottom. Mark this distance on the perpendicular bisector you just spent. Endpoint of the connect curve, the convex part of which is directed toward the bottom. Don't forget that shuttlecocks may be several. Mark the pattern on the wedge where they primaqiune.
5
Fold the fabric into 6 layers. The symmetric wedges, so do not care about which side to cut. The pattern can be tailor pin it with pins or tack a thread in several places. Circle wedges, do not forget to leave 1.2-1.5 cm on all sides for seams.
6
Take the belt. The billet is a rectangle whose length is full waist, plus allowances, plus 4-5 cm on the clasp. Its width is twice the width of the belt, plus allowances.
7
Baste and sew between the wedges. This can be done in any order, but the first knit them in pairs on the long sides, then connect together 2 pairs, and at the end sew on the third, leaving the upper part of seam slit for zipper. Seams Ratatouille. Allowances finish with a serger. Where the flare starts, it is recommended to cut allowances to the seam remained of 0.1-0.2 see Vmlite and viacyte zip.
8
Fold belt in half lengthwise right side out, fold and zautyuzhte. Fold allowances inwards and also zautyuzhte. Fold the blank wrong side out and sew the short seams. Sew the waistband to the skirt. The clasp better make stronger. This can be, for example, button and slotting the loop, and the inner side of the pair of hooks. Buttons should not be used as they can fail at the most inopportune moment.
9
For classic Spanish skirts make shuttlecocks. Draw on graph paper a circle with a radius of 7.5 cm From the center will Nefertiti the second circle, adding to the radius of the width of the flounce. Internal and external rings, add a seam allowance. Mark the cutting line, continuing one of the radii. Draw the right and left of this line allowances.
10
Take the desired amount of circles for the bottom flounce. Sew them. The bottom edge of the handle. It is possible to pull up on a regular sewing machine, but it is better to make a "rulik" using the serger. Sew the flounce to the lower cut skirt. Zautyuzhte allowances up. The remaining shuttlecocks do exactly the same.
11
For a simplified version of the skirt flounced ruffles can be replaced. Take strips of the desired width. To sew each have several more or less short strips. First sew the individual parts together. Treat lower part. You can hem ruffles, tucked twice. You can also use a serger. The top edge of the ruffles sew a seam "forward a needle" small stitches or prostrochite to type and structure. Sew the frill to the lower cut skirt. Sew the following ruffles towards the bottom up. Before participate, fold 0.2 cm top edge.
Is the advice useful?
See also
Присоединяйтесь к нам
New advices