How to cook potatoes

As you know, in Russia potatoes have started to grow in the eighteenth century, and since then, the potato remains a popular food product. Potatoes, commonly called a "potato" is very useful because it contains a large amount of nutrients. There are many different recipes of potato meals. 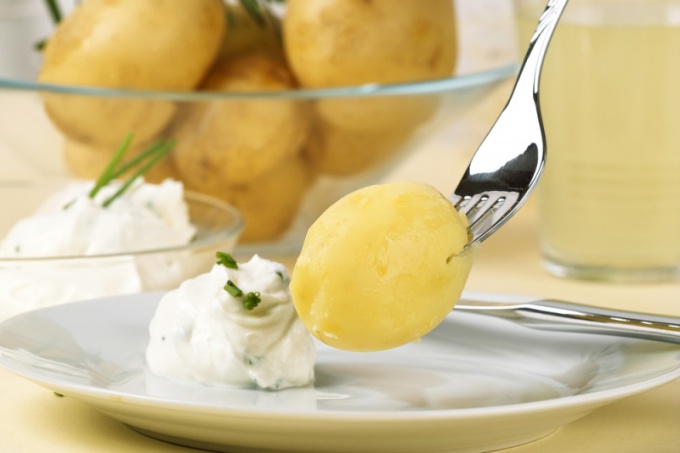 Related articles:
Instruction
1
One of the ways to eat potatoes - cook it. And, it would seem, what could be simpler - boil a potato, but it can be done in several ways. Let us consider two simple, yet easy recipe of boiled potatoes.

2
First - boil the potatoes "in uniform". For this we need a few dirty potato tuber, pot, water and salt. Put the potatoes in a saucepan, cover with water and place on high heat, not forgetting to cover it. Bring the water to a boil and add a pinch of salt, reduce the heat, cover again with a lid, continue to cook at least 15-20 minutes. To determine the readiness of potatoes should pierce the tubers with a fork or thin knife. If the fork or knife are potatoes in butter, then time to drain the water and put the potatoes.

3
Second - cook the potatoes, brushing her before. It will take a little more time, but cooked peeled the potatoes much faster. The procedure of cooking peeled potatoes is no different from cooking the potatoes "in uniform".

Note
Peeled potatoes will cook much faster if it is pre-cut into two or three parts, and putting in a pot, cover with water so that the tubers were barely covered with water. Also welded this way of potatoes, you can make one dish – mashed potatoes. Just mash boiled potatoes, add warm milk, butter, and mix thoroughly.

Useful advice
To cook the potatoes "in uniform" is often the most preferred option. Because to cook the potatoes "in uniform" does not need to be cleaned. And cleaned potatoes, few people loves. Moreover, it is noticed that two or three potatoes, cooked "in uniform" is much faster to eat than the same amount of treated potatoes. And all because during cooking raw potatoes does not give a portion of their nutrients into the water and saves them in the tubers.
Is the advice useful?
See also
Подписывайтесь на наш канал