Why wolves are scared of flags

The wolf is predatory and dangerous creature. Often it is described a real nightmare for any person. Some revere him as a noble and fearsome beast worthy of respect. But what kind of flags, which he is afraid? 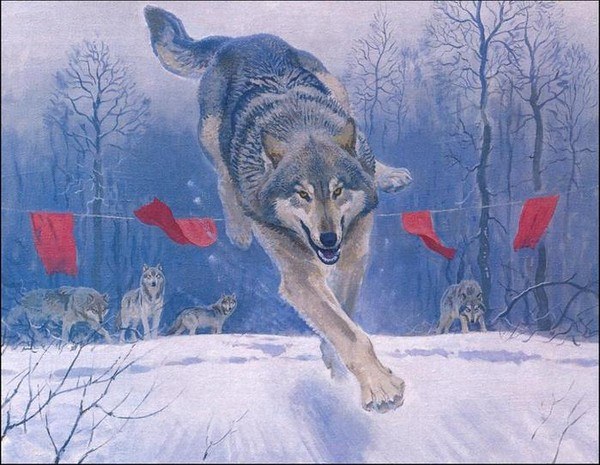 Wolf hunting is quite varied. One of the options is the environment of forest, which are driving the wolf pack, red flags. Somehow while trying to break out of this circle the wolves shy away from red pieces of cloth and walk along them, trying to find a way out. The hunters on guard on the perimeter and shoot such scouts.

Themselves the boxes - low twigs with triangular pieces of nylon fabric red. Flags stuck in the ground or snow on a not too great distance from each other. About 60-80 cm. Or as a variant of the stretched nylon cord at the level of 25 cm above the ground and the flags hung on him. This method is used less frequently.

Strange, it seems evident that this harmless twigs and cloth, why wolves can't escape? But with the bear, for example, this method of hunting would not pass.

There is a myth that wolves accepted the check boxes for the fire because of the color. But it's not. Wolves vision black and white and they see everything in shades of grey. So that the flags can be at least yellow, though green and red to make them for the convenience of hunters.

The secret lies in the other. I must say that wolves are one of the most careful predators. And therefore survive more often than other animals. But in this case, a cruel joke with them playing their caution.

The boxes smell like a hunter. Wolves know a man like that, who can destroy them. In spite of all the stories about how the wolves stealing sheep, carry off poultry from the yard or even may steal the baby, if it all took place a very long time. When the man and the wolf were on an equal footing.

Even ate the wolf strange odor of man, all before him is an unfamiliar smell, and therefore intrinsically dangerous. By the way, this method of hunting is invented for a long time and was initially used different unnecessary items and just sticks. Hunters were improved, so appeared modern boxes with a strictly defined shape and size.

And yet this method of hunting is not always successful. Desperate the wolves are willing to take the risk break out of this vicious circle, jumping line marked in red cloth. Such wolves and two lines of flags will not stop.