5, 2015 was the 13th annual music award Muz-TV "gravity". Contrary to tradition the venue was a sports complex "Astana-arena" in the capital of Kazakhstan. The winners are rejoicing and the people waiting for the speech of the owners of silver platters in the Kremlin. 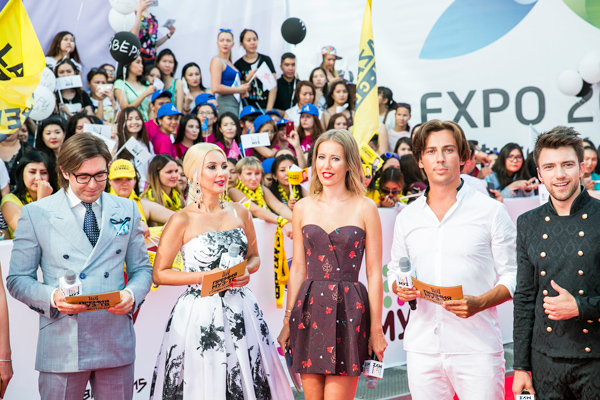 Despite the name "gravity" (gravity), many of the nominees could barely stand on his feet. Reason: strong gusts of wind and rain. The weather was opposed to the show.

Not without incident – the red carpet was carried away by the wind, producer Yana Rudkovskaya broke the phone, and Nikita Presnyakov with bandmate crushed metal a backdrop during a photo shoot. The singer escaped with slight concussion and a bruise of the shoulder.

Leading award: Ksenia Sobchak, Andrey Malakhov, Maxim Galkin and Lera Kudryavtseva in difficult conditions, kept his composure and even joked. The leaky roof of the stadium and the unbearable heat inside the room also did not prevent the award to take place.

Among the first honored the memory of the unexpectedly deceased 28 APR singer Batyrkhan Shukenov, noting his contribution to the development of the music industry of Russia and Kazakhstan. In the category "Best album won the singer Emin album-revelation "Clean", and best pop group for the second consecutive year, becoming the group Serebro, this time in its new composition. Rock best band was a group of "Animals".

The winner in the nomination "the Best concert show" became Dima Bilan, recently celebrated with a Grand concert of his 33rd birthday. "Breakthrough of the year" marked Egor creed, and this is not surprising – the last time the guy literally blew up the video charts with their new songs.

"The best duet"showed the band VIA Gra and the ILO teamed in the hit song "Oxygen" two weeks holding strong positions in the Russian charts. Grown-up and similar hair and outfit on the ancient goddess, singer Nyusha with her hit single "Tsunami" has won the status of"the Best songs".

The love of the audience still did not leave Philip Kirkorov – with the support of fans, the singer received the title of "Best performer". The women's title in this category deserve Ani Lorak.

The prize for the best video received Anita Tsoy with the video for "my air, My love," Sergey Lazarev music video "7 digits" and a couple in love: Nikolai Baskov with his wife Sophie by touching and sincere video for "You're my happiness".

For best song in a foreign language a plate handed to the Russian electronic band "ALIEN24" for the song "Vally". Kazakhstan also did not remain without gifts: in the nomination "Best artist of Kazakhstan" won the young singer Kairat Nurtas.