Very often, you notice that your own or purchase potato begins to darken. It can turn black during storage or during the cooking process, and sometimes after it. Often one can observe that othrewise potatoes, after a little lie down on the plate, suddenly darkened and became black. The reasons can be several. 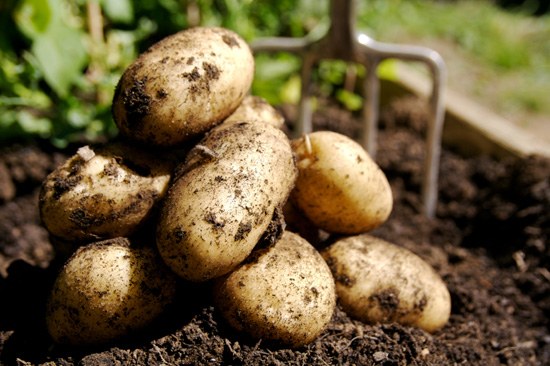 When cooking usually blackens the potatoes grown in overpopulated the soil and stored in case of insufficient ventilation. These two factors lead to the lack of oxygen, causing the potato "choking". To prevent this from happening, once a week, check the basement and inspect stored vegetables.

It is important to monitor the humidity and temperature in the room. It is impossible to prevent the emergence of sweat on the lids of boxes, boxes and covering fabric. Perspiration causes rapid mould growth, which absorbs oxygen. Wet roots must be thoroughly dried and moldy and poveglia immediately remove.

Another reason for darkening of potatoes is the lack of potassium in the soil. During its growth the potatoes are consume potassium two times more than other minerals. But in some soils may not always be necessary for plants the amount of potassium. To solve this problem by adding the ground of any potash fertilizers, do not contain chlorine. And to the tubers during cooking blackened, you need a pan, add three or four Laurel leaves.

In addition to the reasons for the darkening of potatoes may be incorrect compliance with storage temperature and damage during harvest or transport. At harvest no need to throw the potatoes, allowing her to constantly hit her. Avoid extreme temperatures when storing. Before placing the potatoes in the basement, give him a little soak in a dry and cool place – this will allow the tubers to dry and gradually cooling off.

Peeled raw potatoes and after a while begins to darken because it contains compounds that interact with the air they begin to oxidize quickly. To avoid this the peeled roots must be filled with water.