The practice of bathing in the consecrated ice-hole on Epiphany is very widespread in modern Russia. Many people try to follow this tradition, every year coming to the open waters with the aim of dipping in Holy water. 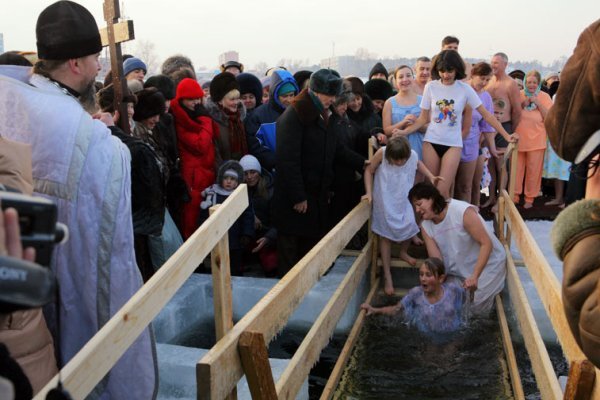 First of all, it should be noted that wishing to live in consecrated Epiphany hole (Holy water) have to resort to such practices immediately after 12 o'clock on the 19th of January, but only after the consecration of the water in the font. Otherwise, a person "dives" in plain water. The consecration of the sources is carried out at different times. It is possible that some clergy (especially in large cities) due to the large number of the clergy sanctify font ("Jordan") around midnight. However, these cases are not so frequent in modern practice.

Often the baptismal font is consecrated after a night of festive celebration in the morning. In some churches the Liturgy on the feast of the Baptism of the Lord is not done on the night of the 19th of January, and on the morning of the same number. In such cases, the sources may take the night before the consecration Liturgy. Thus, depending on the time of the consecration of the font and need to count the correct time of immersion in the Jordan.

It should be noted that it is customary to bathe in the sanctified sources during the astronomical day-19th January (on the day of the feast of the Baptism of the Lord Jesus Christ). With the onset of the 20th of January (starting 12 hours night) bathing in the font will be terminated. Currently it's already hard enough to meet people who plunge into the hole after the 19th day of the second month of the winter.