Baptism is one of the main festivals of the Christians. It is celebrated the Orthodox Church on January 19. Another name for the Epiphany – the Theophany. The gospel in the time of Jesus ' baptism in the Jordan God was manifested in his three persons - the Father, the son and the Holy spirit. It is believed that on this day God comes into the world, to show him the Light Unapproachable. The celebration of this day has its own rules and customs. 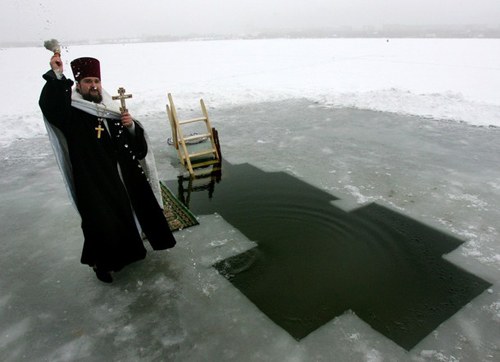 Related articles:
Instruction
1
The festival starts on 18 January, in the evening, when all Orthodox Christians celebrate Epiphany Eve. Prepare dinner lean cuisine. From rice, honey and raisins make kutya or sochivo. The table needs to gather the whole family.
2
Then go to the temple on festive Epiphany service. The main worship service usually begins around midnight and ends by morning. After service will be performed the blessing of water, you will be free to recruit from special containers in the temple. It is believed that the Epiphany water has healing powers and can heal wounds.
3
When you go home after the festive service, sprinkle some Epiphany water to all the corners in your home. According to the old belief that this ritual will bring peace and order to your home. In the past sprinkled the water not only at home, but also outbuildings, corrals, where they lived Pets, and poured a little water in wells.
4
There is another interesting tradition. People released doves, it symbolizes peace and the end of the winter holidays. If you have the desire, then buy a pair of doves and release them to freedom.
5
January 19, on Baptism go to the nearest pond, which made Jordan. This is the hole for the blessing of the water, which are cut in the shape of a cross in the ice of rivers or lakes just for this holiday. The priest performs the blessing of water. People wash her face and basking in the hole. According to numerous reviews of people each year plunge into the Jordan, after this procedure, they don't get sick, but on the contrary, I feel energized.
6
It is believed that after the day of the baptism of water in the Jordan for another week remains consecrated and can be performed ablutions. Decide for yourself whether you are ready to plunge into winter in the ice, but to go and at least look at this action necessary. The main thing is to get into the spirit of the festive season.
Is the advice useful?
Подписывайтесь на наш канал