What is more dangerous bleeding is venous or arterial

Under the medical term "bleeding" understand the loss of blood from the circulatory system of the body. Blood from a blood vessel can get in or flow out. Each type of bleeding in the absence of measures to stop it can cause serious consequences and even death. 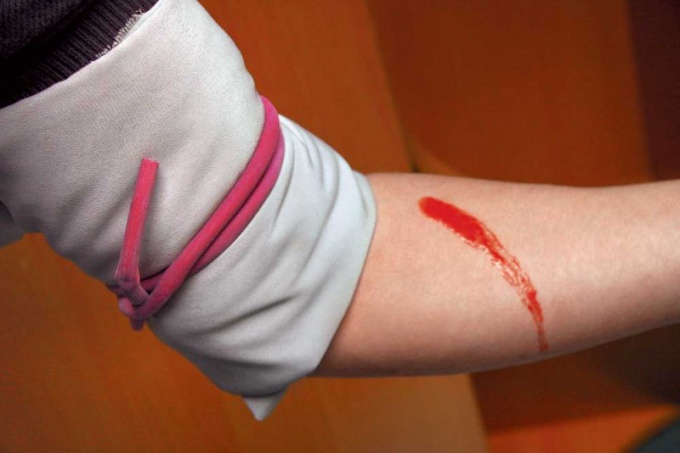 Arterial bleeding occurs as a result of arterial injury. This type of bleeding is the most dangerous because the blood is thrown fast, pulsating jet. As a result, in the shortest possible time comes acute anemia. To determine the damage to the arteries can be a bright scarlet color of blood, uchenomu the pulse of the victim, quickly decreasing blood pressure. To the above signs may be added nausea, vomiting, dizziness and fainting. Death occurs as a result of cardiac arrest or oxygen deprivation.

The lack of assistance may lead to loss of the limb, which disrupted the blood supply. Deficiency of blood in the tissues is critical in 8-10 hours after the injury this will start the process of development of gangrene – gangrene of the limb.

Compared to veins, arteries have less pliable and thicker walls, which are difficult to compress when pressing the muscles to the bones. In addition, the pressure of blood in arteries is much higher than in the venous vessels.

The symptoms and effects of venous bleeding

Venous bleeding is the result of violation of the integrity of the veins. It can be defined by slow blood flow dark cherry color. Under the condition of low internal pressure of the blood can stay on their own due to the formation of a fixed clot. The most dangerous is the damage to major femoral, jugular and subclavian veins.

Why is arterial bleeding dangerous?

The answer to this question lies in the speed with which the loss of blood. The sooner this happens, the higher the threat to the body. Very fast bleeding does not allow the body to run the defense mechanisms, heart is deprived of adequate blood, as a result, blood circulation becomes impossible. Despite the fact that blood loss does not go beyond 20-25% of the total weight and is about one liter, the risk of death.

Slow bleeding large losses of blood volume is less dangerous and does not pose life-threatening conditions. The bloodstream has enough time to adapt to decreasing the circulating blood volume. This allows the body to use its backup capabilities and run protective mechanisms.
Is the advice useful?
See also
Присоединяйтесь к нам
New advices