Often found in water bodies long and thin worm, which is called "horse hair" or "hairy". Widely known stories about the dangers of hair and about how he is a parasite in the human body. 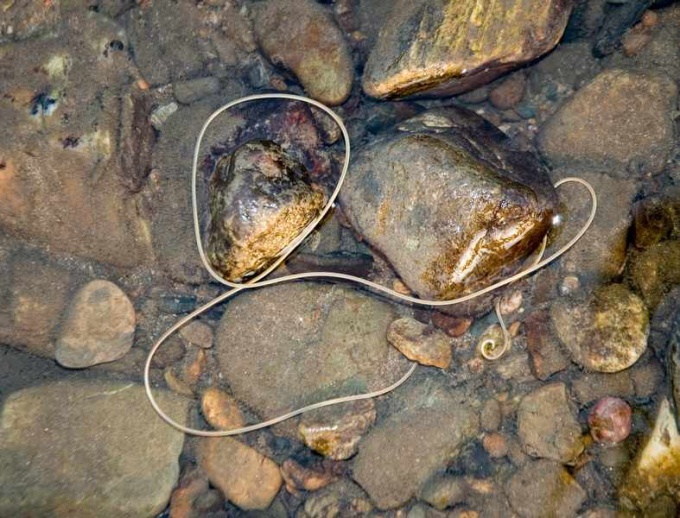 The worm is the "horsehair" or "hairball", can be found worldwide. Adults usually live in fresh water. It is believed that if the reservoir can meet the furry one, is a sign of clean, unpolluted water. Adult length is 30-40 cm In appearance the worm is similar to a long hair, hence its name. Even Conrad Gesner, a Swiss scholar of the XVI century, wrote: "Some people believe that it revived in water horsehair, but it's unlikely." In Russia common nematomorpha of the genus Gordius, named by Carl Linnaeus because of the fact that when mating, the worms curl into a "Gordian knots".

Clutches of hair contains up to 1 million eggs. The larvae of the worm are parasitic way of life, have a size of from 50 to 100 microns, can actively penetrate the body of the victims, or get there with food. If the infected victim is unsuitable for the larvae of the host, it can survive for long periods in his system as long as the victim will not eat larger animal, for example, a predatory insect. In the body of the host larva grows and develops to adult. Before completion of the formation of the larva may influence the behavior of the host and causes it to seek water where prosurvival his body and gets out

The harm of the worm to humans

Having apparently not too attractive, has long hair, it scares people. A widely circulated story about how the pile can penetrate into the human body when bathing and live in it for a long time, causing harm. Sometimes there are stories that these worms emerge through the skin of a human or even kill him, penetrating to the heart. In fact, for a human hairball is absolutely harmless, besides the adults do not feed on organisms, they do not even eat, their only goal is reproduction. The larvae of the worm in rare exceptions can get into the body of large animals, but do not cause harm and do not last long. Chewbacca, being the larval stages of the parasite insects to humans is completely harmless. Therefore stories about him assaulting a man are fiction or based on similarity with some feather duster worms-nitchatami, which can parasitize in the human body.

Thus, the worm horsehair, as stated by biologists, harm to humans absolutely no harm, so don't be afraid. But if you noticed in the pond feather duster, it just means that the water is clean, and you can safely swim, without fear to die from this terrible beast.
Is the advice useful?
Подписывайтесь на наш канал