How do catheterization of the auditory tube

Catheterization of the Eustachian (auditory) tube is the introduction into the tympanic cavity of air under pressure. Procedure is prescribed to improve hearing or diagnostic purposes. 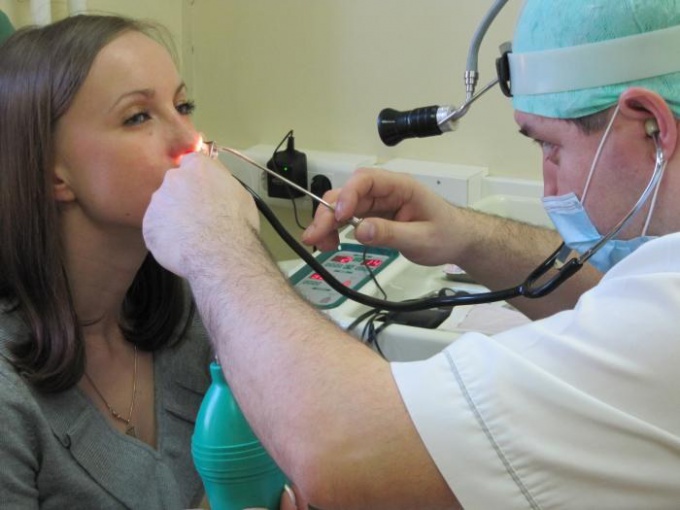 Related articles:
Instruction
1
Preparing for catheterization of the auditory tube is to hold the front and back rhinoscopy to detect possible anatomic obstructions: tumors, scarring in the nasopharynx, a deviated nasal septum, compromising the patency of the nasal cavity, hypertrophy of the turbinates of the nose. For the procedure used special ear curved metal catheters having different thickness and curvature.
2
On the 1st end of the catheter is the beak thickening, which is introduced into the pharyngeal orifice, located in the auditory tube. On the 2nd end has a trumpet funnel. It has a ring that indicates the direction of the "beak". Catheters have different sizes, they are selected individually depending on the width of the nasal passage of the patient.
3
Catheterization of the Eustachian tube is carried out under local anesthesia. Before the procedure, the patient must be carefully to blow his nose, so that during blowing in the tympanic cavity could not get the infectious material. A catheter is inserted into the nostril, the doctor holds his thumb and forefinger, "beak" down and pushes to the back of the throat.
4
Further, the instrument turns "beak" to the nasal septum at a right angle and pulled back, until then, until it engages the rear edge of the vomer (unpaired bone that forms the back lower part of the bone of the nasal septum). Then the doctor turns the beak of the catheter 180 gr. in the direction of the lateral wall of the nasopharynx, place it horizontally and, after rotating the tool up another 30-40 gr. accompanied to pharyngeal opening of the Eustachian tube.
5
The ring on the funnel of the catheter should be directed toward the outer corner of the eye of the patient. Then the doctor places the tip of the cylinder in the socket of the catheter and carries out the injection of air into the tympanic cavity in the amount of 3-5 times. Upon successful completion of the procedure there is a characteristic noise that a doctor hears through the Otoscope. In the case of normal patency of the Eustachian tube will hear a soft noise, the stricture it will be intermittent. In the case of obstruction of the auditory tube, the noise will be absent.
6
After suffering acute otitis media in a patient comes with persistent of the hearing, to do this, hold 1-3 treatments. At short-term improvement in 1-2 days re-blowing. Side effects of catheterization of the auditory tube: rupture of the tympanic membrane, the appearance of dizziness, tinnitus, fainting, subcutaneous emphysema of the neck, face, nasal bleeding. The procedure is not appointed children up to 3-5 years.
Is the advice useful?
Подписывайтесь на наш канал