Why the cat doesn't want to feed the kittens

Cats are very good mothers, caring and gentle. They carefully care for their kittens: feed, clean, educate. But there are cases when the cats abandon their maternal duties, and the responsibility for the lives of defenseless kids is entirely borne by the owner. 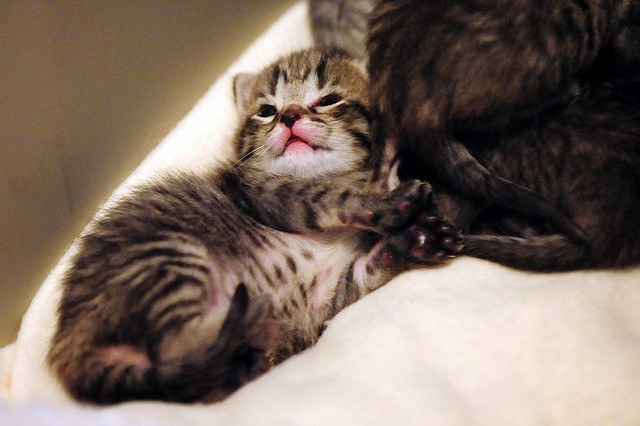 Unfortunately, there are cases when the cat refuses to feed their offspring just because of laziness. Home favorite, spoiled by owners that just don't want to shoulder the responsibility. Accustomed to a pampered life, they are unprepared for the implementation of complex maternal duties.

A spoiled cat could be mentally not prepared-even for the first birth. When you start the fight, she goes for the host or hostess, cries, complains of pain and needs attention. Nothing can be done, Pets for thousands of years living next to a man, forget their natural essence and lose their instincts.

Owners have to help your cat in all: to assist in childbirth, to help wash the kittens, put kids to your nipples. If the owners behave correctly, after some time the maternal instinct is switched on, and the cat begins to understand what she needs to do with these squeaky balls.

The cat is much closer to nature than man. My instincts are telling her a model of behavior in different situations, including in case of birth of non-viable offspring. The mother just refuses to feed those kids, who have no chance at life.

Cases where all the kittens in the "party" are not viable, is extremely rare. It happens only when giving birth to a sick or old cat. Often in "denial" fall into one or two kittens. To help the kids is impossible, because to artificially feed sick kittens is very difficult, and pointless. Since his mother rejected her own children, it is better to leave them to the mercy of nature.

The danger and wrong human behavior

During labor, the cat is experiencing psychological shock. Especially often there are cases when birth occurs for the first time. After the psychological trauma the mother may have a negative attitude to "perpetrators" of their pain and refuse to feed them. As a rule, this behavior is temporary and after some time the maternal instinct takes over.

Sometimes the owners fault that the cat is not behaving as it should. They do not have enough attention to the woman in labor, admitted to the place where toddlers, children, strangers or Pets. In such circumstances, the cat could sense the danger and refuse to come to their own kittens. In this case, the owners need to make a new mother and the newborn in the other, more calm and safe place.
Is the advice useful?
See also
Присоединяйтесь к нам
New advices