What if in the basement there was a water

Failure to follow necessary steps in the construction process of the basement sooner or later have to face the problem of flooding of basement groundwater. Most often, the defects make themselves felt in spring or autumn, during snowmelt and rainfall. 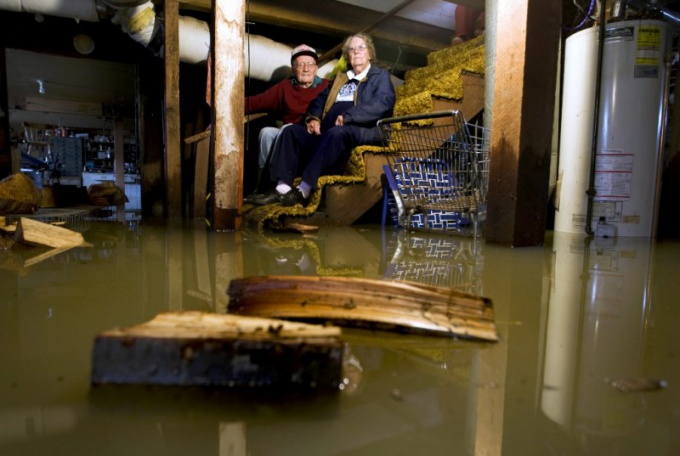 Dehumidification of the basement

First you need to remove water from the basement. If the water a bit, then it can be done manually. If the volume is large enough, then the best device to pump is a drain pump. He usually has a small size, but it has sufficient performance and is able to pump water containing impurities and debris.

After removing the water cellar must be drained by removing all its contents – boxes, racks, etc. - and thoroughly cleaning the floor from the remnants of debris. First, the basement should be dried by increasing natural ventilation by opening doors and Windows.

You can then speed up the drying process using other ancillary devices – ventilators and dehumidifiers. Is recommended to use them simultaneously – the fan itself does not have the function of drying the air, but will contribute to its circulation.

The fastest way to dry a basement after a flood is to establish in it the brazier. To make it yourself from an old bucket or any other metal container. While draining the basement using grills must provide good ventilation in the room.

Disinfection of the basement

When you use the brazier smoke helps to remove mold spores and mildew generated in the basement from moisture and prolonged standing water. You can also disinfect the premises, treating walls and floors with a chlorine-containing substances.

However, the most prevalent means of helping to get rid of mold and mildew in the basement, are still solutions of lime and copper sulfate. They are encouraged to process the entire inner surface of the basement after flooding. All the furniture and other items located in the basement, also need to be cleaned, disinfected and treated with special preparations against the fungus, before refitting.

Today there are many technologies to protect the basement from groundwater. You can install internal drainage, which allows water draining from the basement, or make a hole for water collection with automatic pump, which will pump out.

The easiest thing to do waterproofing without reconstruction of the basement by using special mixtures and mastics. They are applied on the inner surface of the basement and forming a waterproof film, protecting it from moisture.
Is the advice useful?
See also
Подписывайтесь на наш канал