It helps if juice burdock for women's diseases

Burdock, or cocklebur, is a perennial herbaceous plant that grows to a height of three meters, and the roots injects a depth of half a meter. There are more than eleven types of burdock, which grows everywhere in temperate zones. This plant is used for treatment in folk and traditional medicine. 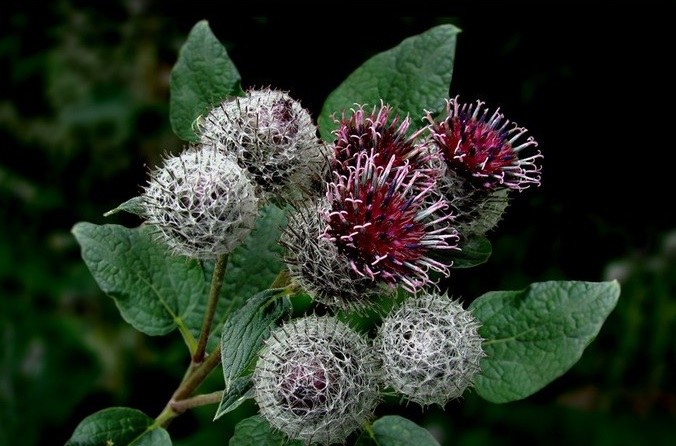 Related articles:
For medical purposes use the leaves and seeds of burdock, but the most valuable are the roots. Recipes of traditional medicine is recommended to take burdock root tincture to stimulate the metabolism, as a diaphoretic and diuretic, as a remedy in diseases of the gastrointestinal tract. Positive effect burdock in the treatment of various dermatitis, is successfully used in gynecological diseases.

Dug out, taken a large and fleshy roots, and further purified them from the earth, but in no case do not wash. In contact with water, the roots lose their biological activity. Thick roots cut lengthwise into several parts. Dry dry well-ventilated area. Dried roots within ten days. Dried with a soft clean brush from impurities and cut into slices not more than 5 mm.

Store in a tightly sealed, opaque banks. With proper storage of burdock roots retain their biological value within three years.

Mug with myoma and fibroma

In the treatment of women's diseases such as myoma and fibroma of water prepare a tincture: 20 g of dried burdock root should fill in a thermos, pour 0.5 ml of boiling water and infuse for ten hours. To make such a tool needs to four times a day for 100 ml for four weeks. To do a two-week break and, if necessary, continue the course of treatment.

In case of mastitis - a disease that occurs frequently in lactating women, for pulling the heat should use the leaves of burdock mammaries. To keep them needed to complete drying.

When inflammation of the mucosa of the female genital organs is necessary to prepare the infusion. Pour 20 g of dried burdock root in two cups of boiling water. Simmer on low heat for 10 minutes to remove. Let stand, strain the decoction and take half a Cup four times a day, 30 minutes before meals. The treatment will take place for two weeks. Each time should be prepared fresh broth.

You can dilute the tincture in the proportion of 1 part infusion and 2 parts warm boiled water. This solution nightly to do vaginal douching. To monitor and if necessary to continue the douching until complete inflammation of the vaginal mucosa.
Is the advice useful?
See also
Подписывайтесь на наш канал