Why you need a capacitor in Minecraft

Many gamers, even just starting to learn the wisdom of Minecraft, in particular, the different circuits in it, sometimes I wonder, why do they need a capacitor. Such detail comes across in the gameplay infrequently, and because its purpose is unclear. Meanwhile, the simple answer to the above question is no. 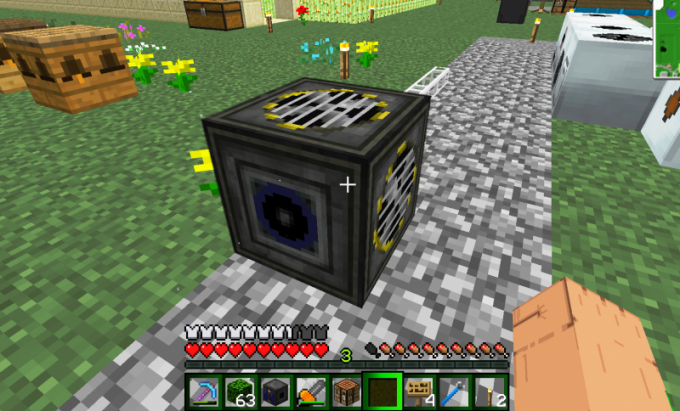 In the normal (no plugins or mods) version of Minecraft is no such thing as a capacitor, does not exist. Rather, the device performing its function there, but called something completely different - comparator. Some confusion in this respect occurred in the period of development of such a device. First - in November 2012 - representatives of Mojang (the company behind the game) announced the imminent appearance in the gameplay of the capacitor. However, a month later they voted that as such this device will not, and instead the game will be a comparator.

A similar device exists for verification of occupancy behind it containers. These may be the trunks (including in the form of traps), the brewing stands, dispensers, extractors, furnaces, hoppers, etc.

In addition, it is often used to compare two signals of Redstone in between them - he gives the result in accordance with the way it was programmed in the chain and which mode is selected for the mechanism. In particular, the comparator can allow the ignition of the torch, if the first signal is greater than or equal to another.

Also sometimes the capacitor in the comparator is installed next to the player by connecting its input to the latter. When the audio device is playing any record, the above device will produce a signal equal in strength to the ordinal number of the disk.

Crafted this comparator is simple, if there is enough hard to obtain resource - a hell of quartz. It should be placed in the Central slot of a workbench, above and on sides set of three red torch, and in the bottom row - the same amount of stone blocks.

Capacitors are found in different mods for Minecraft

In a large number of mods across the capacitors having a different purpose. For example, in Galacticraft where gamers have the opportunity to fly to many planets to explore local realities, there is the crafting recipe of the oxygen condenser. It serves to create mechanisms like the collector and storage of gas for breathing, and the air-lock. To manufacture four steel plates are placed at the corners of the workbench, in the centre - a tin canister, and under it - the air. The other three cells is a plate of tin.

In JurassiCraft there is a flux capacitor - a teleport to move into the amazing game world full of dinosaurs. To create such a device should be placed in two outer vertical rows of six iron ingots, and in the middle two of the diamond and between the unit of Redstone dust. In order for the device to work, you have to put it on a pig or a trolley, and then click the right mouse button, quickly leaping back. This requires maintaining a high-speed device.

With the mod Industrial Craft2 have the opportunity to create at least two thermal capacitors - red and lapis lazuli. They serve solely to cool the nuclear reactor and to accumulate his energy and good for cyclic structures of this type. We chill they, respectively, red dust or lapis lazuli.

Red telecommunicator is made from seven pieces of Redstone dust - they must be installed in the form of the letter P and place underneath the heat sink and the heat exchanger. Crafting is the same lapis lazuli device a little more complicated. To create four pieces of Redstone dust are placed at the corners of the machine, the center will block of lapis lazuli, on either side of him two red thermal capacitor, the top heat sink of the reactor, and the bottom - its the same heat exchanger.

In ThaumCraft, with a focus on real witchcraft, capacitors are also used. For example, one crystal is for the accumulation and impact of magic. And, interestingly, to create it and many other things allowed only after studying one particular element of gameplay - studies conducted at a special table with certain devices.

Is the condenser of the eight dim fragments in the center of which is placed on the workbench mystic wood block. Unfortunately, this device - as well as his constituents lasted only until ThaumCraft 3, and the fourth version of the mod was abolished.
Is the advice useful?
See also
Подписывайтесь на наш канал