In Minecraft almost non-existent border implementation of ideas. Here you can build a lot of items that will be useful to the character. An important role in making things play mechanisms. They allow you to automate a house, a car and other household items. That is why each player needs to know how to do in Minecraft mechanisms. 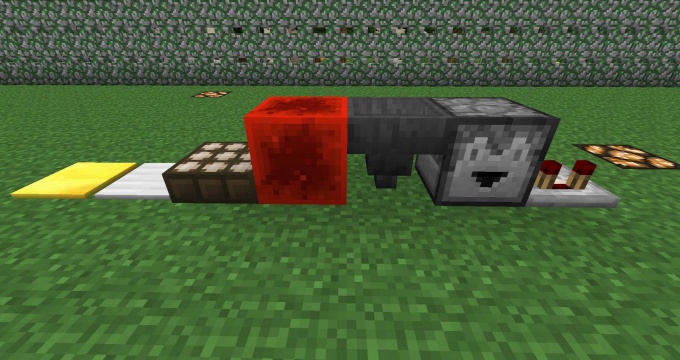 In Minecraft you can make a variety of different mechanisms that will help to ease the life of the character. To use them, you must go to the inventory tab.

How to make red dust in Minecraft

One of the most useful mechanisms in the game is the red dust. It is necessary for the supply of electricity to other mechanisms. To make red dust, need to find and destroy the red blocks of ore. It is possible to take away the witch, or buy.

How to make a Minecraft lever

An important mechanism is the lever. It is a switch in the game. To make this mechanism in Minecraft, you need to put on the bench, cobblestone, obtained by treatment with a pick of ordinary stone and a stick, made of two boards.

How to make a red flame in the game Minecraft

Torch red dust is needed to activate the red wires, it includes a variety of mechanisms. It can be used as a light source, however, he is not bright.

To make red torch in Minecraft, you will need a stick and red dust.

An ordinary door in the game you can access by pressing the right mouse button. However, you can make even the iron door that cannot be opened without the use of additional mechanisms. The doors can also be done automatically. To bring doors in Minecraft in motion may need wires, buttons, levers that are installed in the place of the opening.

How to make a Minecraft pressure plate

In Minecraft you can make a mechanism such as a push plate. It is another type of switch in the game. Electricity is supplied to the mechanism, if it is mob or player when the plate is empty - the power is terminated.

To make pressure plate in Minecraft, you need a workbench to put two stones or two boards. Wooden plate can be included not only a live entity, but abandoned her on the subject of or released an arrow.

How to make the Minecraft repeater

Repeaters are used to create electrical circuits in the game. They can delay, enhance or direct the signal in one direction. For the manufacture of a repeater want the stones, red flares and red dust. To do in Minecraft repeater for the manufacture of the mechanisms, it is necessary to have all items as shown in the picture.

How to make a piston in Minecraft

Many of the mechanisms in Minecraft without pistons to do the impossible. These useful items result in movement of the blocks in different complex structures. Without piston almost impossible to make a trap, lift, automatic doors, farm. The pistons are conventional and sticky, while the former can push objects, and the second to return.

To make a piston in Minecraft, need wood, rocks, red dust and iron ingots. The crafting of the piston you can see in the photo.

So out of the ordinary piston to make a sticky, you need to put it on the bench and add to it the mucus, which can be obtained from slugs.

How to make in Minecraft dynamite

With dynamite in Minecraft you can make a clever trap, a TNT cannon design for the destruction of a large number of blocks. For the manufacture of TNT you need sand and gunpowder. To activate the dynamite, you need to use fire, a machine with a red stone or explosion nearby.

How to make a dispenser in Minecraft

Another useful mechanism in the game - distributor. He needed to vybrosa or the issuance of a large number of items. To craft a dispenser, you need a workbench to put the boulders, onion and red dust.

Thanks to all of the described things can make a in Minecraft the mechanisms that are used in everyday life. Such things make the game much more realistic and more interesting.