How to connect trolley in minecraft

Minecraft is good because with each new update it gets more and more interesting and closer to reality. Here gamers will find a lot of things that surround him in everyday life. So, in this game they will be able to create rails and trolleys to join the latest in train, organizing some semblance of a railroad. 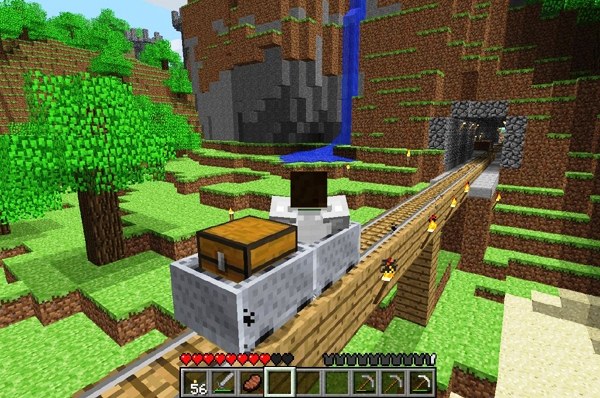 Trains of the trolleys in the game without mods

Trolley in Minecraft a good way, in the presence of Railways, to explore the area with a fairly decent speed (at least faster than walking). This is especially necessary in those locations where built many cities and other large settlements.

For ordinary drive the player requires only one trolley (she is on the bench from five iron ingots). But he seldom travels light. Sometimes it is necessary together with them to move at least one chest with valuable items - for example, when moving from one house to another.

How to connect between them several trucks that they move smoothly and did not depart from one another, and one never knows the players to lose their belongings? In the game with no plugins and no mods mechanisms and parts for coupling such improvised trains is not provided. Some illusion of integrity of this movement is due to the fact that behind this composition place the trolley with the engine that pushes others in the right direction.

The role this motor plays a conventional oven (the same one that crafted of the eight stones). It is set on top of the trolley. She immediately starts to move in the direction the player is looking, and change it's direction can only right click.

Grip trolleys in a modified Minecraft

However, much more interesting things will come out, if you add some Minecraft mods. Thanks to some of them in the gameplay will be almost these compounds, in which the cars will be really linked with each other.

Quite simple to implement such in the presence of a modification RailCraft dedicated to Railways. Here it is possible to connect any desired number of trolleys and this is done with a special tool - a crowbar.

For crafting such a useful stuff familiar to many experienced gamers resources - pink petals and iron ingots. The last in the amount of three pieces - need to set on the bench diagonally from the left bottom corner to top right. Four petals of roses will fall on the sides, above and below the Central slot of the machine.

For the connection of trolleys they need to put a number on the rails and a crowbar in hand you click on one of them right mouse button. When you see the text about the beginning of the clutch is necessary in the same way to click on a different car. If all goes well, the player will see the message Link is Created.

The connection of the trolleys will be possible after installing the plugin TrainCarts. It can even be used in multiplayer and on the server it does not need Permission. Here to create trains do not need special tools to install the Spawner sign to show the composition of the trolleys (up to thirty pieces), and they will already be linked among themselves.
Is the advice useful?
Присоединяйтесь к нам
New advices