How to get rid of grass woodlice in the garden

Get rid of herbs woodlice can as well as from other weeds by using weed. However, it is necessary to make sure that ripped the grass is completely dried up. Concern about reducing soil acidity will bring positive results in the fight against Intrusive weed. 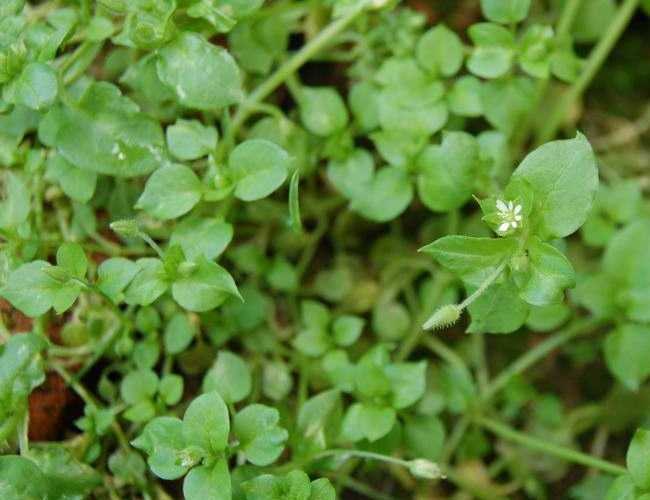 Related articles:
Chickweed has a pronounced therapeutic effect: anti-inflammatory, diuretic, choleretic, hypotensive. For the ability to counteract angina, she received even the name "heart grass". However, when this prostrate annual mercilessly begins to "capture" a huge area of the garden plot, he becomes the most malignant weed. And the usual weeding – absence from the situation, even uprooted and ripped apart the grass with a minimum of moisture again takes root.

The old and true method of pulling weeds – weeding, but the pill bug requires a special approach. The first impression about the ease and speed of its vypaivanija is deceptive, since this grass grows even faster. Chickweed grows from April to October, and its seeds are not afraid of even the most severe frosts. After wintering in the soil and polunovskij at the first signs of spring, seeds woodlice in a month will not only lush growth, but new seeds. If not to weed thoroughly a pill bug until the blooming phase, it will be able three times over the summer to give the new generation. Thus, the plot will be so clogged with seeds that will not help even deep digging.

When the site launched, will have to be patient to fight against the woodlouse. After all, the seed, lying at a depth, can again and again to remind myself when the next digging. According to scientists, seeds woodlice have an enviable viable for up to 30 years. Pulling this weed need to be addressed until late autumn, to the surface portion covered by the woodlouse, not left under the snow. And even better after the harvest to clear the entire area from outside are overgrown and dig manually or treated with the cultivator.

In addition to seed reproduction, chickweed is able to autonomic. The grass roots are on the surface, so you should try to pluck the weed along with them, and in any case not be stored within the site and sent to the compost pile, which is the most favorable environment for woodlice. During the summer the best time of the struggle against woodlice are hot days, when torn, the grass burns quickly in the sun. Some gardeners prefer to cover after weeding the soil with black film to the remains of the weed suffered the same fate.

The fight against woodlice can lead to despair, especially if the soil at the site has a sour and highly acidic environment. In such conditions grass is growing "by leaps and bounds and only weeding is unlikely to help. Need to increase the level of rndu neutral. For this purpose, suitable, chalk, lime, fly ash, dolomite powder, shell eggs, old plaster. Only the flour and dolomite lime cannot be connected with urea, superphosphate, ammonium nitrate. With the application of lime fertilizers not only reduces pH and improves soil structure, aktiviziruyutsya the activity of microorganisms, which significantly reduces the growth of weeds.

Since the above tools are alkalis, they don't mix with other fertilizers, which are used for feeding during the summer. They are made in the fall or in the spring under perekopku. You can water the soil with a solution of ash (1 Cup per bucket of water), but wood ash is a weak acting agent. Helps water solution of lime and sulfur in the ratio of 50:5:1. Applied to the soil alkali, rich in calcium, which dissolves in water, changing the reaction. An acidic environment will be able to win, but vegetables will not receive the necessary trace elements, if these procedures deoxidation during their growth and fruiting. Summer is much more important to ensure that used fertilizer did not lead to the opposite result. There are a number of plants which also positively influences the level of acidity. For example, phacelia.
Is the advice useful?
See also
Подписывайтесь на наш канал