How to tie up cucumbers

When growing cucumbers outdoors or in a greenhouse, it is important to take care of the plant, creating all the conditions for proper growth and development. One of those conditions is timely horizontal or vertical garter. 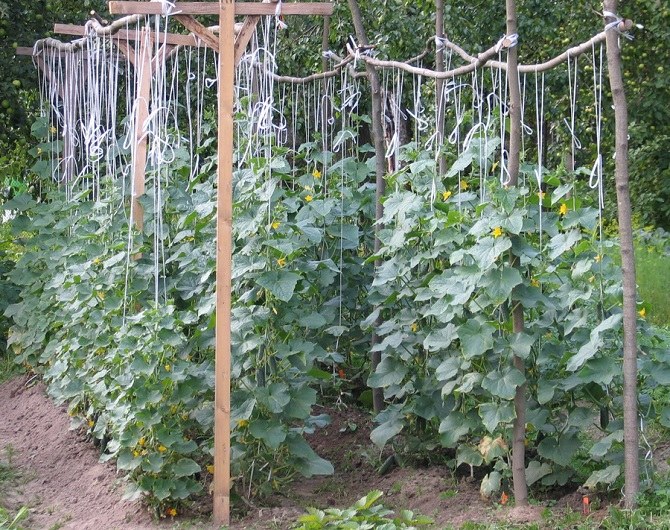 Related articles:
A garter of cucumbers should be performed after the plant is stronger and stretches above the earth's surface 30-35 cm, with the formation of 4-5 full leaves. By the way, the garter is necessary not only for vegetables, but for tomatoes, peppers and peas.

In fact, the plant, which grow cucumbers, is hateful vine that has been rapidly developing and constantly drawn to the light. If the plant is not to be tied up, it can capture a rather large area of garden, constantly underfoot, to crawl to the areas where grow other vegetable crops.

In addition to space economy, the cucumbers should be tied up for the simple reason that it greatly simplifies the harvest. So, if the vine had stretched out on the ground, some of the fruits you can simply not notice, and if the plant horizontally or vertically in a sling, everything, even the smallest cucumbers are clearly visible.

It is important to know that cucumber is one of those vegetables that are most susceptible to various fungal diseases. Tying up the plant, the person negates its contact with the soil, but in most cases, soil contains many foci of dangerous infections.

One of the most common methods of trellising cucumber vines – horizontal. To tie up a plant in accordance with this method, you need to drive in the garden two wooden (metal) peg and tension between the twine.

Pull the twine should be at different heights through every 10-15 cm Plant, gradually growing, as if climbing the stairs, clinging to his mustache for the split. This method is quite good, but it has its disadvantage, which is that sometimes the cucumber tendril is too difficult to reach to the next level.

There is also a vertical method trellising of cucumbers, which is more practical and efficient both outdoors and in the greenhouse. The essence of this method is simple. In the garden in the immediate vicinity of the plant are driven by two wooden supports in the form of the letter "t". The height of the supports should be no more than two meters. Between the upper parts of the supports extends a stiff wire, stretches well, fits securely. To the wire in different places tied with twine.

Actually, this twine cucumber vine will climb up. Tie the plant to the twine should be very carefully and not too tightly. The garter should be done at the level of the second sheet from the ground.
Is the advice useful?
See also
Подписывайтесь на наш канал