How is the delivery of standards on the maroon beret

The maroon beret is a symbol and pride of special forces. However, in order to obtain a maroon beret must pass a series of difficult challenges, proving their physical and psychological preparation. 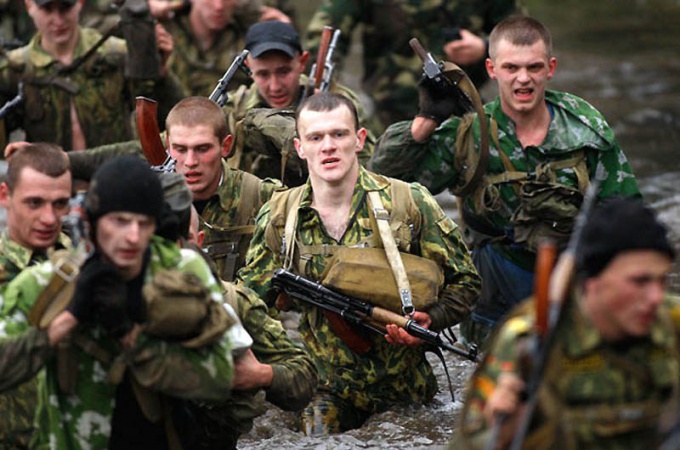 Related articles:
The maroon beret is not only a headdress, but an indicator of high level of training of the officer. Each year the soldiers of the special forces pass the exam in order to prove the ability to overcome difficult tests.

To pass the exam for wearing a maroon beret can any soldier serving on contract or call. It is necessary to serve in the special forces for at least six months, receive a positive response from the commander and have excellent grades in academic subjects.

A preliminary test is performed 2-3 days before the main exam. It consists of Jogging for 3 km, pull-UPS, and test, which involves lying down and my burpees, pushups, exercises on the abdominal muscles, jumping up from squatting position. All of these exercises are repeated seven times.

In one day the candidates need to overcome seven challenges: a March, special obstacle course, preparing for the assault of tall buildings, acrobatics and unarmed combat.

The first phase of testing is March. A prerequisite is the overcoming of water obstacles. Depending on the commander's order may include fire, evacuation, overcoming different kinds of obstacles and blockages, exercise. The total time allotted for March, is set based on weather conditions and terrain but should not exceed more than two hours.

The next step is to overcome the obstacle in extreme conditions. It is executed immediately after a forced March without rest. The band are set charges and products RDG-2B. It is obligatory to smoke the obstacle.

The third phase of testing includes high-speed shooting against the fatigue of the body. The time allotted for shooting is no more than 20 seconds. To accomplish this, special exercises candidates go on the firing line.

The fourth stage consists of the assault of tall buildings using rappelling equipment. The fighter starts test from the window on the fifth floor. The team commander begins to descend. Reaching the window on the fourth floor, he is obliged to make several shots from the machine. In the opening window of the second floor should knock the leg frame layout and can throw a grenade. Then down to the ground.

The control time of the test shall not exceed 45 seconds.

In the fifth phase, applicants must fulfil a set of acrobatic exercises. It includes: kick kicking with the execution of the somersault and front flip from a springboard, lifting the body from the supine position.

This is followed by a stage of performance of a complex of special exercises. The subject requires the proper execution without errors and stops in sequence, and high quality beats.

The final stage involves hand to hand combat. The training bout lasts no more than 12 minutes without interruption, with change of partners. Having passed the test shall be the one who was active and didn't get the knockout.

Evaluation of the tests

In part, you will create a special Commission to assess the behaviour of applicants. In all tests, it receives credit or fail. After receiving a poor evaluation of the applicant is removed from the competition. All applicants received a rating of "pass" on all tests receive a long-awaited green beret.
Is the advice useful?
See also
Присоединяйтесь к нам
New advices