The recipe for fisherman's soup on the fire: the secrets of Russian cuisine

Ukha – traditional Russian dish, which for some reason always seems to taste better if you cook and eat it in nature. Maybe it's in clean air and relaxing atmosphere. But of great importance, and that is brewed in this case ear on fire and always freshly caught fish. 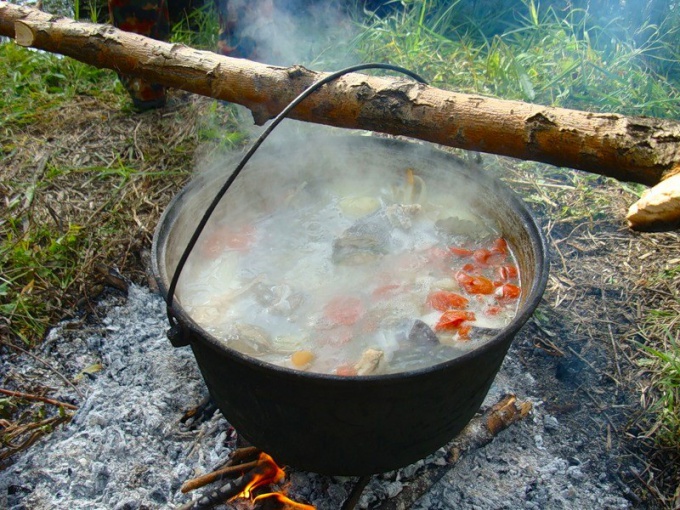 Real ear should have a slightly sticky texture, which give the broth only certain types of fish. That's why for the preparation of such meals to better use perch, ruffe, a perch – this fish turns out the ear, which is called "white". They also can add catfish, tench, burbot. Of carp, carp or carp, it turns out the so-called black ear, which, however, is not inferior to taste the "white". Well "red" ushytsya made cook of sturgeon, salmon, white salmon, or Beluga.

Cook soup in the dishes with a thick bottom and walls, preferably in a pot. And always without a lid, use that at the very end when the dish is fully prepared. It is also very important to cook the soup over very low heat, without boiling, to the fish and other ingredients languishing in the broth.

Too much spices should not be used as they can kill the flavor of the dish. In the ear it is best to add the parsley root or celery, black and fragrant pepper, Bay leaf. In a dish of red fish, you can put a few threads of saffron.

The real fish soup is prepared without the contents, of flour or of cereals, as the broth must be transparent. The only thing to add at the end of cooking – a pile of good vodka, which will make the flavor more rich and interesting, and will also eliminate the possible smell of the slime that occurs often when using river fish.

A recipe for delicious fish soup on the fire

Fish clean, gut, remove the gills from it, a good wash. Heads and tails cut off, add to the pot along with the peeled heads of onions and parsley root. Cover with water and put on fire. When foam begins to appear, carefully remove it. Cook for 15 minutes, and then remove all of the contents thrown away.

Put in boiling broth cut the remaining large pieces of the fish. When ear comes to a boil, carefully remove the foam, and add cut into 4 pieces of potatoes. Cook until tender. 5 minutes before the end add salt and all the spices, tomato with a cross cut on top, pour a glass of vodka. Then remove from heat, stir in chopped green onions, cover pot with a lid and leave for 5 minutes to ear the real thing and became even tastier. Serve with remaining green onions and black bread.
Is the advice useful?
See also
Присоединяйтесь к нам
New advices