What is needed for fish guppies

For fish guppies need a simple aquarium with water at room temperature, which is in a bright place. Each fish should have a few liters of water. Guppies need to be fed twice a day. 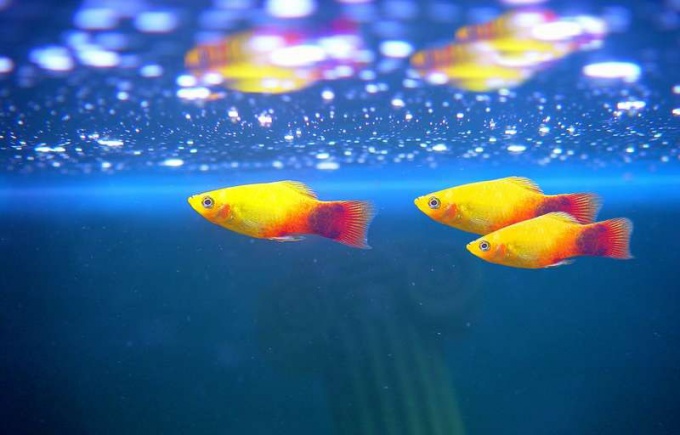 Related articles:
Fish guppy became popular among novice aquarists because of its simplicity. For their maintenance does not require specific equipment, like filters and thermostats. Guppies do not need a large aquarium, but if not start there are too many fish, or you can abandon the aerator. To care for guppies.

What should be the aquarium for guppies

The capacity of the tank should be calculated based on the fact that the male for comfort need one liter of water, and the female two. But it's better if each fish will have about three liters of water. The water in the aquarium should be at room temperature to reach 24C. Permissible variation from 18 to 30.

The lighting is not too important to the lives of guppies, but if you want your fish had bright colouring, you need to put their aquarium on a lighted place. Selite in an aquarium with guppies, predatory fish. Guppies in front of them completely exposed.

What water and food is needed for guppies

Guppies are very picky fish. The quality of the food they will come and live and dry food, which is sold in specialized stores. Young fish can be fed egg yolk, cheese and powdered milk. With enough light in the aquarium formed the thread algae, which diversify the menu of your fish.

Feed guppies to two times a day. Make sure not to leave excess feed to pollute the aquarium. If after five minutes the food eaten whole, it must be removed from the aquarium.

The water in the aquarium needs to be changed gradually every day, but is allowed to change it once a week by about a third.

You need guppies to breed

Guppies belong to a viviparous fish. Instead of spawning, they produce a formed fry, which from the first moments of his life unable to swim and feed.

To guppies started breeding, you need to slightly raise the temperature of the water in the aquarium and reduce its stiffness. But fish can reproduce and without additional stimulation.

Pregnancy of females lasts about twenty five days. At this time her belly becomes angular, near the anus, there is a dark spot. The female can produce fry up to seven times after one mating.

Guppies may eat their young, so the fry until they grow up, you need to clean the tank or to settle in a common aquarium algae thick in which the young can hide.
Is the advice useful?
See also
Присоединяйтесь к нам
New advices