What are the causes of the Holocaust

The causes of the Holocaust... They can be called, stating the prerequisites. But none of these reasons, and all together, never be able to justify or explain why the incident was possible. Why Disaster struck. Why the so-called "cultural nation" calmly and methodically killed 6 million people. For mankind it will always remain beyond understanding. 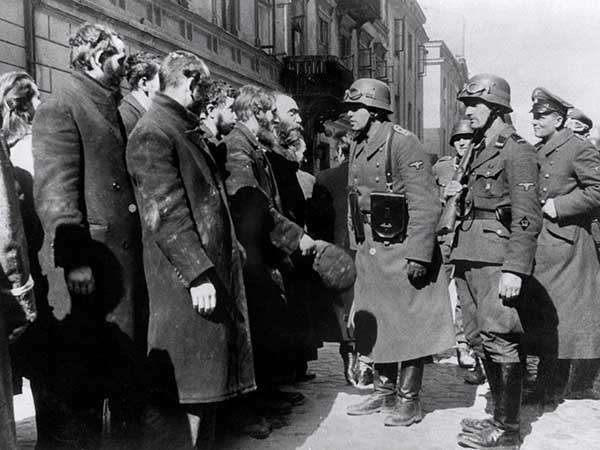 Related articles:
Historians, sociologists, political scientists, philosophers, religious scholars, theologians, psychologists - dozens of scientists struggling with the answer to the question "what are the causes of the Holocaust." They might be able to give the most close to the truth answer - then - and - if they can ever get organized. Now the causes of the Holocaust examines each of them with his narrow point of view.

Anti-Semitism is whether the main reason? And maybe "weird" interpretation of economic "necessity" - an asymmetric response to the victory in the First world? Or distorted understanding of medical research? Or the fault lies with the people, departed from their God, thus violating God's chosen people? Or the Holocaust was a result of the struggle with the Bolsheviks-Communists? Or maybe everything is simpler: the evil will of one, to undermine the power of the psychopath, nurture a shameful irrational hatred, found support among the same as he did – "like-minded party", with psychologically related to sadistic pathology?

In any case, the ideologues and perpetrators of the Holocaust somehow thought justified to our descendants at least twice: after the Nuremberg laws in 1935 and settled them in 1942 in the program plan of genocide at the Wannsee conference.

However, none of the war criminals convicted at the Nuremberg trials and Israeli processes – from Kaltenbrunner to Eichmann - not helped reference to any of the adopted laws, orders, doctrines, decisions or decrees requiring the destruction of Jews, Gypsies and other peoples because there is a simple and human, and the difficult legal concept of a "criminal order".

Anti-Semitism, as a prerequisite of the Holocaust

Irrational hatred of the Jewish people for centuries rooted in the land. The origins of this hatred can be found in the denseness of the popular crowds, exposed to the aggressive influence of the first Christian priests, and many others. This hatred has long been a archetype of the attitude towards foreigners in General, and not like anyone in particular. Therefore to speak about any special German anti-Semitism is not necessary. Many times in any of the centuries after Christ, here and there, out of the darkness pop up, and pop up now odarennye anger the faces of the fighters for the purity of the nation: whether Spanish, American, Russian, Ukrainian, Polish, Hungarian, Lithuanian, Arabic Islamists and bring them the number. When a critical mass builds up, then wait for the riots becomes an everyday occupation the Jewish people.

After the first world war and before the Second, the bell of anti-Semitism for the German Jews sounded repeatedly, becoming unbearably loud. But a watershed day for all of human history – 30 January 1933 – the day when President Hindenburg appointed Hitler Chancellor of Germany, passed almost unnoticed.

However, initiated by Hitler's Nuremberg racial laws, depriving Jews of their civil rights, and the massacre under the beautiful name "crystal night," has sobered many of those who still inescapably believed in humanity and common sense.

Why did German Jews massively left the "overnight" brutal country, yet it was possible? It also has a number of reasons.

The new German government is really carefully squeezed the Jews out of the country, but it is not going to release them "for free". Arranged various bureaucratic obstacles from which it was necessary to pay off and not everyone can afford it. Those who could, often, work the usual narrow-minded adaptability, as well as an irrational hope for the best, and the rational belief that their social status is still unshakable. It remained in Germany and Austria the Jews were the first settlers methodically a ghetto and concentration camps the first victims of the Holocaust.

After the First world war, Germany was in a deep depression and economic crisis. In the presence of a wealthy and successful stratum of citizens with Jewish names.

The concept of constant and ever-increasing joy of life and national unity formulated by Goebbels, demanded urgently to find Finance for the arrangement of General holiday of life and the same for an enemy nation, around which all could unite.

The solution chosen by Goebbels, was, as I believe some Russian scientists, to genius is simple: the enemy was assigned to the close conceptual and odious – the Jews. After the appointment of such an enemy the issue of replenishment of the state Treasury and the personal accounts of the Nazi elite in Swiss banks, resolved itself. Difficult decisions no one was looking and demanded.

Expropriation of the disenfranchised Jewish population of considerable funds, Bank deposits, property, jewelry, businesses, shops, farms, etc. – legalized robbery in broad daylight, plus a gigantic scale extortion – off travelling abroad, it is extremely corrected the German economy. Loyal and "pure-blooded Aryans" received almost nothing all of the above and more, which remained after the "disappeared" into nothingness.

If earlier all were taken by the German state machine to exterminate Jews and other peoples were widespread, but not completely formulated a plan, after the outbreak of the Second world war, the German leadership considered it necessary to systematize and develop the experience.

My favorite slogan of the führer the final solution of the Jewish question, which was stated by him in the early 20-ies, officially apply for the program at a special conference convened on 20 January 1942, near lake Wannsee, near Berlin. The authors of the program gradually planned and structured all that was needed to completely genocide the entire Jewish population in Europe. Their plan they called ' the final solution of the Jewish question."

It was after January 20, 1942 machine of the extermination of Jews, along with Gypsies and other nationalities, was put on stream, and none of the performers were not interested in the question – why? It was just a job. Daily and routine. Disciplined servants of the great Reich strived to find the best solution to optimize labor and production. Can we call a good performance of employment duties by reason of the Holocaust? Possible. In any case, the moral aspect of this work is not exactly worried about those who did.

Immorality. Immorality is elevated to the absolute, lovingly cherished pseudo-puritanical "morality" of society: from the promoters, members, General, to ordinary performers of the genocide, immorality, as a state ideology – that's probably the main reason for the Holocaust.
Is the advice useful?
Подписывайтесь на наш канал