Funny contests in nature for the fun of

Stay in the circle of close friends is almost destined for success! You only have to come up with fun games and contests to planned evening certainly exceeded expectations your friends. 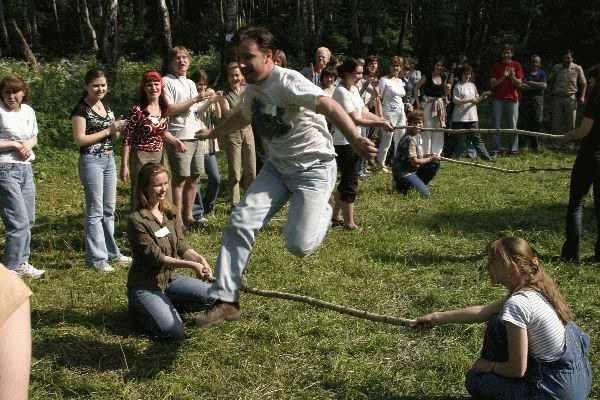 "Pantomime" is a favorite game of mental companies. The person thinks of a word, says it in the ear of another. The player's task to show this noun using gestures. The game goes to a new level, if you try to make a complex image for words such as: abbreviation, enthusiasm, loyalty, eternity, phenomena and so on.

The game "Who are you". Each player writes on a small sheet noun, then this sheet is pasted on the forehead to the neighbor on the right. People must not know what is written on his forehead, his task is to guess the word with simple questions that can be answered only "Yes" or "No". For example, a person on the forehead a piece of paper with the word tiger, he asks "is This a plant?", other players say, "No!". This is followed by a turn to another player and so on. The transition speed is carried out only when the answer to the question was negative.

An interesting game of "Principle". One man stepped aside to listen to other counsel. He is the water. The remaining make the principle for whom they will answer questions, for example, for the neighbor on the right. Water returns and starts to ask simple questions all in order and they must answer, according to the hidden principle. For example, water you asking: "are You blonde?", and you, even if you are the owner of blond hair, but your neighbor to the right, the brunette, replied: "No!". The task of driving to guess the principle itself. It can be completely different, for example: everyone is responsible for themselves or for the closest person who has the piercing, the water, and so forth. Water needs to ask such questions, the answers to which are obvious to all.

You can still play in the famous "Mafia".

Competition "Storytellers". Two teams of three people total in each team there is a narrator, a talking head and gesticulator. The narrator stands to the side and tells an interesting tale. The player, playing as a talking head, sits down on a stump and cleans your hands behind your back. His task is to open your mouth as if it he tells the tale (it is not necessary to forget about emotions and facial expressions). Gesticulator to sit in the back of a talking head, hiding its head. It needs to gesticulate what is narrated in a fairy tale. Teams show and tell their tales, and those who did not participate in the contest and choose a winning team. This is a very funny and exciting competition.

"Captain." Two players tie the eye is ships. Each of them on the captain. All other players are distributed in space and freeze in any position is icebergs. Captains must conduct their ships to a certain installation point. The captain could not touch the ship. He needs to give him a verbal command, for example: "Two steps forward", "squat down", "Three steps to the side and so on. The winner is the team, faster than the ship reached the set point and not touched the icebergs. The icebergs are not allowed to move.

The contest is "Colored volleyball". You need to inflate a lot of balloons. The territory is divided into two equal parts. Must be two teams with an equal number of people. Task: to clear its territory from the balls, casting their opponents.

At the end of this contest you can divide the remaining balls equally between the teams and hold a competition "Sapper" - whose team faster burst balloons.
Is the advice useful?
See also
Подписывайтесь на наш канал