The Holy icon of the Trinity: the value for the Orthodox

The Holy Trinity is one of the fundamental concepts of the Christian faith. It distinguishes Christianity from the other Abrahamic religions: the belief in one God and in Islam and in Judaism, but the concept of the Trinity is unique to Christianity. It is not surprising that such an important concept reflected in the iconography. 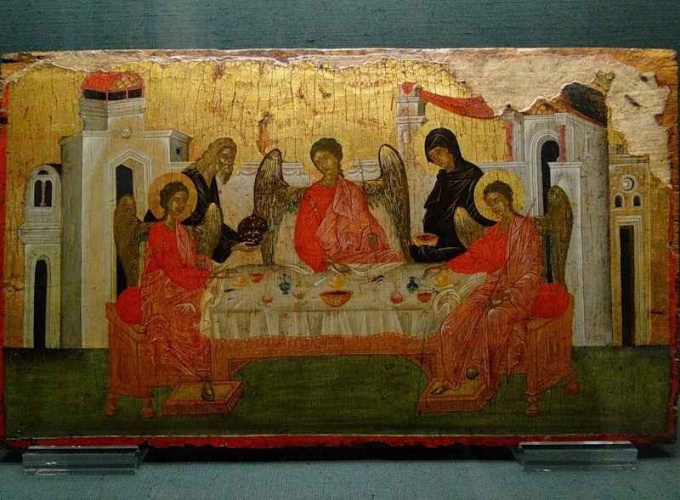 Related articles:
The Trinity is not only one of the most important concepts in Christianity, but one of the most mysterious. "One in three persons" – it is impossible to understand, comprehend to the end, to understand the mind, it can only be taken as a given, sincerely believing. Even harder to imagine the Holy Trinity in the form of specific visible image, but writing the icon demands it, and the painters found a way out, based on Scripture.

In the old Testament tells how God appeared to Abraham and Sarah in the form of three strangers. The couple has welcomed them, not immediately realizing that it was the Triune God. This episode is one of the foundations of the Christian doctrine of the Holy Trinity, and that he often used to image the Trinity icons.

The Trinity is portrayed as three angels sitting under a tree or around a table with refreshments, sometimes near them there are Abraham and Sarah.

The most famous icon of this kind – "Trinity" by Andrei Rublev. The icon is notable for its brevity – there's not a single superfluous detail: neither Abraham and Sarah next to the angels, nor of a still life on the table – only the Cup in line with the "Cup of suffering" that you have to drink to God the Son. Angels are perceived as a vicious circle, comparable to the notion of eternity.

The new Testament Trinity and the Fatherland

In another embodiment, the image of the Trinity, God the Father appears in the form of the elder. The feature of this image is that the head of an old man surrounded by a halo is not round, as usual, and triangular. The nimbus of God the Father placed the letters "Am" as in the halo of the Savior, emphasizing the unity of God the Father and God the Son.

A variant of the NT Trinity – Fatherland, God the Son in the image of a child sitting on the lap of the elder – God the Father, the Holy Spirit, as in the previous embodiment, presented in the form of a dove.

In 1667 the Great Moscow Council was convicted of any image of God the Father (with the exception of the images of the Apocalypse). Thus, now canonical image of the Holy Trinity is the only "old Testament Trinity".
Is the advice useful?
See also
Присоединяйтесь к нам
New advices