How to check the cooling system

The cooling system of the internal combustion engine can be divided into two types - air and liquid. The most common liquid, although correct to call it mixed. And she, like any mechanism, there are breakdowns from time to time. 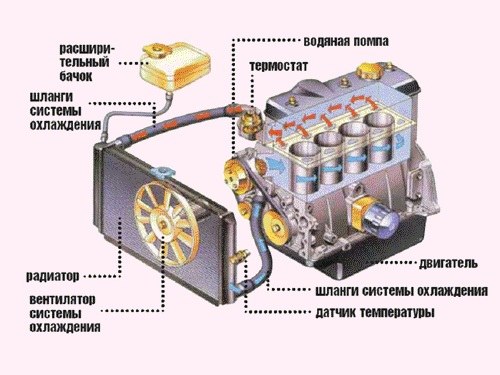 Related articles:
Any internal combustion engine is a source of huge amounts of heat. But when excessive heat is expanding the metal. In addition, the air-fuel mixture quickly evaporates or spontaneously ignited. To prevent this, use the cooling system that is liquid and air. On most modern cars is implemented liquid system. However, it is more correct to call it combination because there is forced air cooling radiator with electric fan.

When the engine drives a pump that generates fluid pressure. Last circulates in two circles – small and large. In the small circle involved all the elements, except the radiator. Switching between rounds is done by the thermostat which activates at a certain temperature. But it happens that there are minor and major breakage. Every driver should know the basic symptoms by which you can quickly determine the fault and fix it.

Failure of the thermostat

The thermostat warms up the engine to operating temperature. Consequently, in the default position it will ensure liquid circulation in a small circle of cooling. In this situation most often occurs jamming of the mechanism. This implies that the liquid enters the radiator, is cooled poorly, so boil.

If you had trouble with the thermostat in the way, it is possible to revive him, however, to achieve correct operation is not released. Light tapping on the body can make the mechanism work. But the effect of such action very small, much better would be to remove the insides from the housing. This will circulate in a large circle, engine overheating will be eliminated. But remove the thermostat you need on a cold engine, pre-drain the coolant.

The failure of the surge tank

When heated, the liquid expands and she had somewhere to go. As a "transit point" and acts as a surge tank. All the excess coolant go into it when heated, and when cooled back into the system. There are cases when the tank cracks. They can appear from the friction of body parts, from negligence (accidental impact).

But more often it happens the damage to the reservoir cap. There are two valves – the inlet and outlet. The first opens when the pressure in the system to 0.13 ATM. The second offer in excess of about 1.1-1.3 Atmosphere. These two valves have a working range in which the coolant:

- has a higher boiling point;
- better circulates through the system.

When failure of the valve, on pressure, the swelling of the surge tank and the nozzles. It is accompanied by the boiling of the coolant.

Breaking the radiator of the cooling system

Most often it just gets stuffed inside or outside. Poor cooling and increased operating temperature is a first indication. Sink outside water pressure or blowing air is the best means for purification. If clogged the channels inside, you must remove the radiator and flush it under pressure.

Sometimes failure of a temperature sensor, which is installed in the radiator. Symptom – excessive heating of the coolant electric fan does not turn on. If there was such a breakdown in the tube, the output from the position – shorting the terminals of the sensor to the fan works constantly.

Can also happen of the leak. The reason is they have loose connections. If you find a leak in the radiator, then the most effective way to fix it is replace the radiator. So it is with pipes that are cracked and covered with small cracks, with a pump, which broke the tightness of the seal or was the destruction of the bearing.
Is the advice useful?
See also
Показать еще
Подписывайтесь на наш канал