As a trained ninja

Ninja Japanese soldiers who appeared in the XV century. They were a part of samurai society. Special training could give the abilities of these people on the brink of the supernatural. 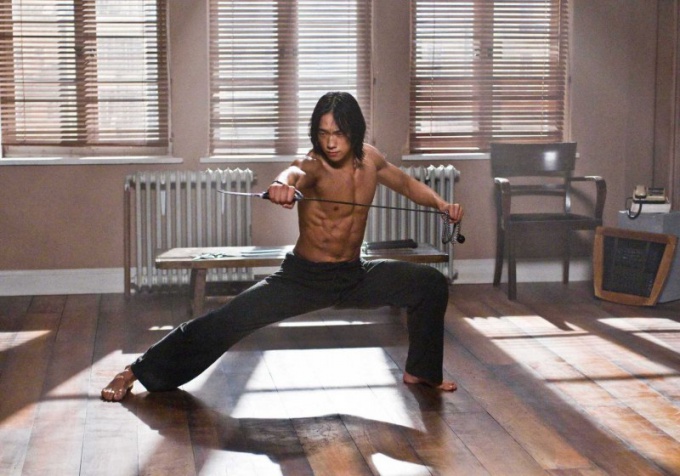 Related articles:
Instruction
1
The biggest burden falls on his feet practicing. From ninja requires high movement speed and ability to climb various objects. To develop these qualities ninja a large amount of time spent in the woods, using everything around for their workouts.
2
Exercise speed: around his neck was tied a ten-meter strip of fabric. When running it was necessary to ensure that the fabric does not touch the ground. For this purpose, the travel speed were to be maximized. Or placing on the chest of the straw hat gave up on the run. The hat stays in place only by the pressure of the wind. The task running is to hold the maximum amount of time with his hat on his chest.
3
Exercise caution develop the skill of silent movement. On the ground laid the sheets of paper. The ninja moved them Jogging, the exercise – as much as possible not to damage them.
4
Exercise endurance: the body hung bags of rocks and run to exhaustion. The route was laid through mountainous terrain. Also a ninja practiced in a variety of types of running: on tips of toes, on one foot, on the water, running double screen step.
5
Ninja learned a variety of jumps: long, on two legs, diagonally. Often the ninja climbs on the walls, to facilitate this action up receiving involving several people. One stood on the shoulders of the other and squatted when he ran third. After the second straightened, giving the body top ninja double acceleration.
6
To develop a perfect sense of balance began with a walk on the thick log, and finished the walk on the rope. To complicate the task on the shoulders can hang the poles attached to them with containers filled with water. Success was considered not to spill a drop.
7
To achieve high breakdown strength of the fingers and palms of the ninja resorted to training on the concentration of energy. To enhance grip, ninja for a long time compresses and decompresses the fingers in the water. With the same purpose, was worn over the neck of the heavy vessel with the tips of his fingers. The ninja needed a very strong hand, because many of their missions had suggested the lasagna. To achieve incredible strength and endurance of the shoulder girdle, ninjas spent hours in vis on the hands with a heavy load on his shoulders. A good result was to hang this way for 5-6 hours.
8
Ninja since childhood, started to work on the flexibility of the joints, the result of which could penetrate even the smallest opening. However, this is in their abilities and negative side. Too movable joints are easier to injure.
9
Very important was the ability to remain stationary for an unlimited period of time. To do this, learn to control breathing, could walk even up to one breath per minute. This was facilitated by special breathing practices and meditation. To be hardy in all conditions, the ninja forced himself a few days without food. They spent their days without movement, occasionally allowing himself a SIP of water. This ability could be useful, if the person papadeli prisoner or an extreme situation.
Is the advice useful?
See also
Присоединяйтесь к нам
New advices