How to understand that the person is cheating

Unfortunately, often people have to hear the lies: blatant or disguised. Sometimes lying to strangers, sometimes those who barely know each other. Hurts the most when cheating on a loved one. Knowing a few facts, how to recognize a lie, the number of frauds in his address will work to minimize. 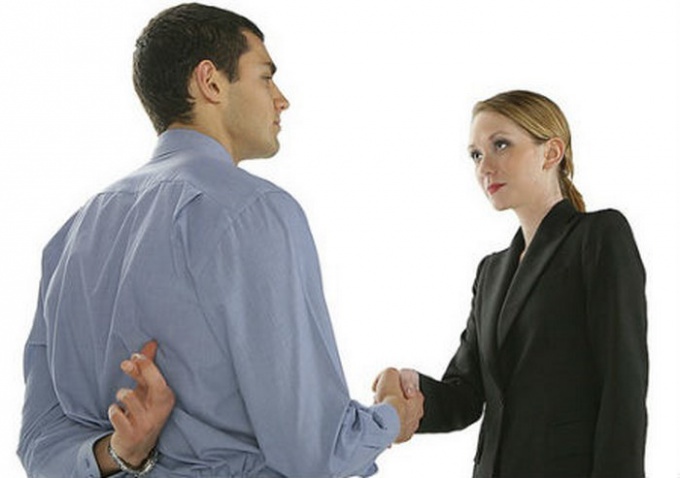 Related articles:
Instruction
1
Pay attention to how the person speaks. It the one who deceives may be saturated with a lot of facts that are not directly related to the topic of conversation. Resulting in meaningless details, you want to make believe what was going on.
2
If the person before you answer repeats your question – it suggests that he wants to buy time. It is required in order to come up with a "plausible" answer to the question.
3
Permanent tsuchikane, instead of a direct answer is regarded as an attempt to hide the true information and the unwillingness to tell you the truth.
4
Pay attention to how the voice sounds. Usually people that cheat, he sounds higher and louder than usual, and it is accelerating. The body itself also has much to tell. The one who was lying, arms and legs crossed themselves. Most often it is not a controlled phenomenon. The person who cheats, gestures, virtually no. He keeps it under control. Starting to gesticulate, it would be difficult to continue to lie.
5
The person who is cheating, emotions appear with a certain delay. This is due to the fact that it focuses on his and only superficially follow the conversation.
6
Suspecting a man in a lie, look at him straight in the face and quite firmly stated that I doubt the sincerity of what was said. Or ironically react to heard and try several times to interrupt the dialogue with unexpected issues. Such actions will help to understand the sincerity of a man, and you will be able to more confidently identify the fact lies.
7
Another distinctive sign of a person telling lies is that when talking to you, it is too often touches her nose or face. Frequent cough, looking away, indicates deception. The person feels restless, tricking you. And so he tries to occupy his hands and pass the time to figure out how to do it right.
8
Cheating woman very much fusses all the time, straightens her clothes and shakes off the dust particles that are visible only to her. Suddenly, in the middle of a conversation to start to smarten up, correcting hair style or makeup.
9
Man, when cheating, may scratch his nose, all the while touching his face, her mouth half open, or, on the contrary, the lips tight. In the speech a sense of excitement and tension, tone of voice can dramatically change for no apparent reason. Often a cheating man marking time, or makes some movement back, as if trying to escape.
Is the advice useful?
See also
Подписывайтесь на наш канал