Where to practice submarine hunting in the suburbs

For many people, spearfishing is associated primarily with depths of the sea. However, in Russia many fans of this exciting venture, for which the best hunting places are water bodies located near large cities. 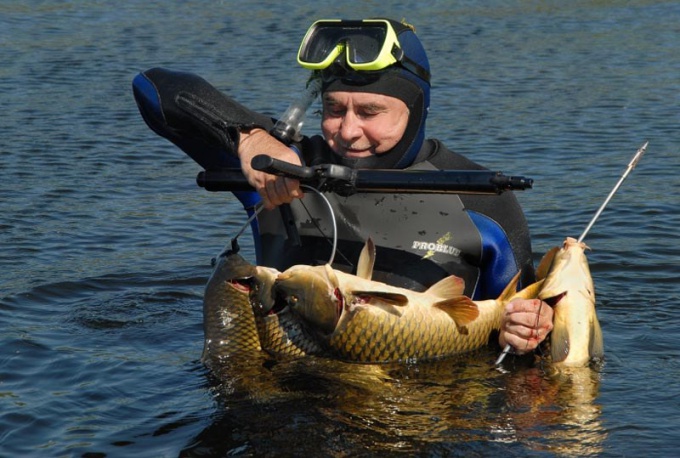 Related articles:
In terms of size of production, of course, leads sea spearfishing. But hunt, for example, in the Moscow region attracts many with its accessibility and good enough trophies. Few people have the opportunity to visit the sea once a year, so go hunting for prey in local waters, as underwater hunting is one of the most exciting activities, whose popularity is constantly growing.

So, where in the Moscow region you can hunt with an underwater gun? Of course, where clear water. This is the main criterion for an underwater hunter.

Usually at the first opportunity the capital underwater hunters keep their way to these rivers Protva (average current, not South of the town of Borovsk); Lama (upper and middle course, to Yaropolets); Black (district villages Olakino); Severka (to farm "Nikon"), wori (throughout the river), a river Tire (landmark – second mill dam.)

I must say that for spearfishing suit many rivers of the Moscow region – especially middle and upper course. In addition to these rivers, and preys on the Oka river within the boundaries of the capital - on the Moscow river. You can look his hunting luck in the waters of the Mozhayskoe or the ozerninskoe water reservoirs, which are quite rare species of fish.

Trophies usually not very large in size, but for a real underwater hunter is not so important. In the waters of the rivers of the Moscow region can get catfish, pike, carp, large roach, perch, gudgeon, perch, Chub, ASP and many other types of fish. Sometimes you can get and acne, that a quite considerable size.

Unfortunately, hunt light in the waters near the capital only in the warmest months of the year – in June and July. The rest of the time you should dive in a special suit. Add to this that without this costume to be in the water at a temperature of 16 -18 ° C preferably not more than thirty minutes.

For spearfishing in the Moscow region, the ideal weapon would be a short shotgun is not more than a meter in length. This is because with this gun much easier to maneuver between the snags and bushes in the narrow rivers of the Moscow region. Going hunting, you need to carry spare lugs, preferably single-toothed, with a folding beard, thanks to which the extraction will not slip off the harpoon.
Is the advice useful?
Подписывайтесь на наш канал