Adam's Apple is formed by the connection of the cartilaginous plates of the thyroid gland. Pain in this area can be the evidence of hormonal dysfunction, cancer, and disorders of a different kind. 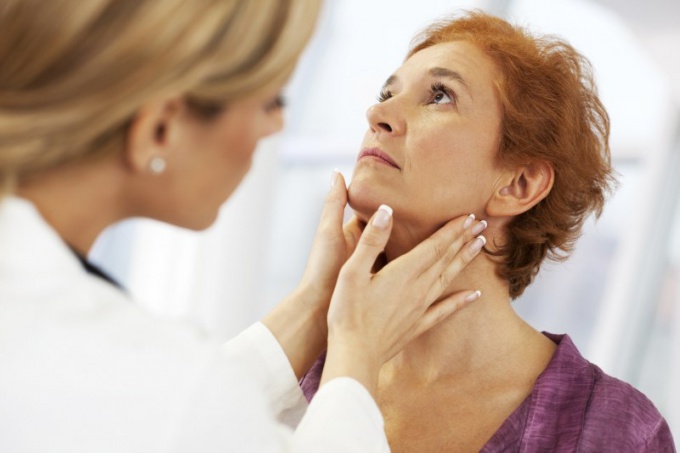 Pain in the throat as a symptom of thyroid dysfunction

A sore throat can be a symptom of hyperthyroidism. This disease is triggered by excessive production of thyroid hormones. Physical manifestations of the disease combined with disorders of the Central nervous system. Typical signs of hyperthyroidism: sweating, tachycardia, nervousness, poor tolerance of heat, a sharp loss in weight, diarrhea.

When thyroiditis in the thyroid gland starts the inflammatory process, often triggered by upper respiratory infection. Its acute form is characterized by severe pain in throat, headache, fever. In the area of the Adam's Apple there is a pronounced swelling. On palpation of the inflamed area causes marked pain. Pain from the neck shifting in the neck and is enhanced by head movements. Tireodit has many varieties, but they all have some similarities of symptoms.

Thyroid cancer can also be the cause of pain in the region of the Adam's Apple. It occurs when breathing and swallowing. In many cases, the symptoms of thyroid cancer are confused with an ordinary infectious disease.

Other causes of pain in the region of the Adam's Apple

In cancer of the thyroid cartilage marked discomfort in the throat, as if there is always a foreign body. The pain increases gradually, depending on the process of disintegration of the tumor. In the later stages joined by hemoptysis, severe trouble swallowing food.

If you have TB disease of the lungs may occur such complications as tuberculosis of the thyroid cartilage. In addition to pain in the throat, the sore throat and hoarseness.

Cellulitis of the thyroid cartilage in the region of the larynx there is a sharp pain in the throat when swallowing. Among other symptoms – unstable body temperature until the fever, difficulty of breathing, aphonia.

Finally, the cause of pain in the Adam's Apple may be hiding in mechanical action. Bruises, fractures of the cartilages of the larynx, squeezing them – all accompanied by pain when coughing and swallowing. Diagnosis in these cases is more straightforward, as patients usually know about the incident of the injury.
Is the advice useful?
See also
Подписывайтесь на наш канал