How to translate a number in radians

By definition one radian is equal to the angle formed by two lines drawn from the center of the circle to the extreme point of the arc length of one radius of this circle. Although radian and recommended for use in the SI system, it is not the only measurement of plane angles. It sometimes leads to the need to transform the other angular units to radians. 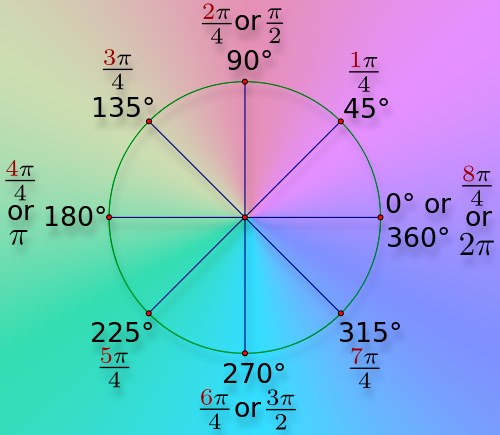 Related articles:
Instruction
1
If you need to convert to radians the measure of the angle, measured in degrees, assume that one complete revolution contains 360°, and this value is equivalent to 2*PI radians (this follows from the circumference of a circle of radius one). Divide a known number of degrees on the ratio of 360/(2*π)=180/π to find the number of radians that corresponds to this angle. If enough approximate values, instead of the ratio of 180/π, use number of 57.3.
2
Sometimes the fractional part of the angle, measured in degrees, is expressed in angular minutes and seconds (for example, 27° 15' 42"). Such a designation is used, in particular, in the designation of a geographical and astronomical coordinates. In this case, when resampling, keep in mind that each radian is approximately equal to 57° 17' 45", or 206265".
3
Another one of the available units of measurement of angles is called "turnover". From the name itself it is clear that one revolution corresponds to the angle of 360°, i.e. 2*PI radians. To convert revolutions to radians multiply them by 2*π, or approximately 6.28.
4
In addition to these units for measuring angles can be used grad - one-hundredth of the direct (90°) angle. For conversion to radians, angles in grads multiply the original value by one-two hundredth of the number PI. This number is approximately equal to a decimal 0,016.
5
In navigation still has application measuring angles in the historic old town. Here is a full circle with the zero point corresponding to the direction of the North, is divided into 32 sectors (Rumba). This implies that each Rumba corresponds to the angle 2*π/32=π/16≈0,196 radian - Rumba multiply by this factor when they are recalculated in radians. Keep in mind that each of the 32 compass points has its own name - for example, the Rumba "Nord-OST" (North-East) corresponds to the angle that is approximately equal to 0.79 radians.
6
Artillery used in marking angles in units of division of the protractor. There are big and small division. Small division corresponds to a corner in one six-thousandth share of the total turnover (2*π), so to translate to radians multiply the original value by a factor of 0,001047. A large division of the protractor contains a hundred small, so use the conversion factor 0,1047.
Is the advice useful?
See also
Подписывайтесь на наш канал