How to change the ring on a telescopic rod

Rings need to be changed at the first signs of wear of the coating on them. Of course, expensive professional and sporting fishing rod best repair shop, but the rods of the middle class are quite capable of recover and their hands. 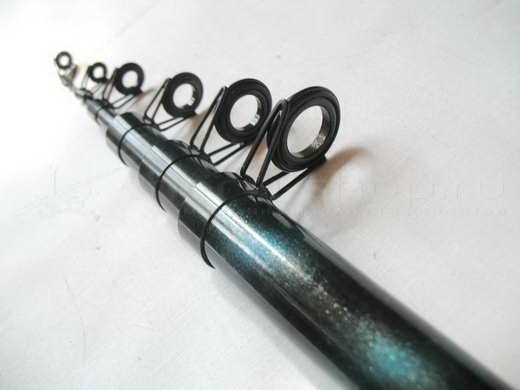 Related articles:
Over time, the rod wear out the rings, coated with titanium nitride. Replacement standard rings for better increases the service life of the line and will allow you to use even a very fine "spider web" for catching vnahlest.

How to understand that the rings have exhausted their resources

The first sign of wear and tear of crossing the rings is the change in color of the surface of sliding linings. Very often on the rings you can see stains metallic color, indicating that the protective coating is partially worn off and the exposed steel base.

If you look closely at the line, which was done 20-30 podmolik on older rings under a magnifying glass it will be visible burrs and scratches. This is especially noticeable in the woven threads without Teflon impregnation. There is another way: with a cotton swab very carefully palpating the inner surface of the rings. In those places where the broken protective shell, the mineral wool fibers will stretch and spread out.

If these phenomena were seen, the rings on the rod should be changed urgently. In some models, crossing the rings the possibility of replacing the lining, but these works are performed, usually in repair shops, and the result of modernization, is made in handicraft conditions, does not always match expectation. It is much easier to buy a set of crossing rings corresponding to the model rods, which can be set independently.

Old Tulip need to warm up with a lighter until the adhesive begins to foam at the joint. Then gently remove the Tulip, and from the end of the tip and remove the remnants of the adhesive. On the cleared part of the Tulip need to try and note the planting depth. If there is a small gap - it can be eliminated by winding a thin silk thread in several layers with wide spacing between turns.

The first end of the tip is covered by a two-component adhesive based on epoxy resin, then made the winding of the thread, which is also abundantly covered with glue. Tulip should be set carefully, turning a little so as not to catch the thread. After installation, excess adhesive is removed when it is necessary to carefully clean the inside of the ring.

In order not to compromise the strength of the rod ring on it attached only patch clips or winding. First, you need to mark on the rod the location of the rings. After that, the old ring is removed, pre-heating the gas burner, and remove glue residue.

To install the ring will need smooth steel wire with a thickness of 0.1 mm and a thin silk thread. Fold wire in half and put along the rod, holding tails by the hand and leaving the loop free. Fingers hold the ring and fix it with thread, linked in the "noose". The thread is wound from yourself and as close as possible, turn to turn, until it covers the leg of the ring completely. Thus it is necessary to put under the coils has a short tail of thread and folded in half wire.

After winding the end of the thread pass into the wire loop and pull on the opposite direction. Now strong enough to pull the ends in different directions to test the quality of the winding. If the thread has been wound correctly, the windings will not move, and the brace will be carefully recorded. The ends of the threads cut and cauterize the burner.

In exactly the same way the ring and secure them on the other side. Thread covered with a layer of two part epoxy glue and leave to dry. In order to give the rod a more aesthetic appearance, the place of lining rings covered with adhesive PVC tape or heat shrinkable tube in the color of the rod.
Is the advice useful?
Присоединяйтесь к нам
New advices