How to learn to keep the bar area on a

On the bar area - not the most difficult exercise. However, its implementation requires strong abdominal muscles that works well under static loads. 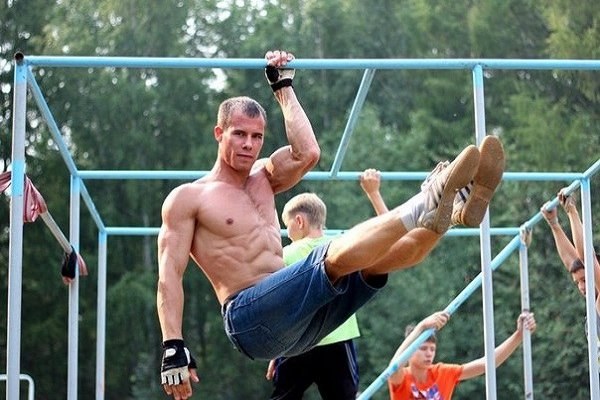 Related articles:
With the beginning of spring many of us go to the street to get rid of excess weight, to make the shape more beautiful, improve the physical condition. During the construction of the figure, giving it a beautiful shape helps ordinary bar. In its vicinity there are plenty of exercises to develop different muscle groups.

The bar straightens the spine, shakes hands, back, stomach and shoulders. However, not everyone is given even basic exercises, for example the area.

To be able to keep on the bar area, you must have strong stomach muscles. First of all it concerns the lower part, which is responsible for the rise of the lower extremities.

To keep the area at least ten seconds, it is necessary to strengthen not only abdominal muscles but also your back, as it is also involved in the process, though not so much. Some do not even notice how hard on the back when lifting legs.

Do not rush to immediately jump to the horizontal bar. Training can be done at home. Most effective exercise – elevation of the legs and he flips them over his head from the supine position. Daily perform at least three sets of 10-15 repetitions in a month. This will help to strengthen the muscles of the lower parts of the press to prepare for static loads.

It is important to know that raising and lowering the legs without pauses – it's more dynamic load. If to lift his legs and fix them in one position, that is static load. In the case on the bar area we are talking about static load. So after a month of pumping press at home you can perform this exercise with slowdowns at several stages to increase the static load.

In some cases, the trained body will be enough two weeks of classes to go to the bar.

The transition to the bar

When the lower part of the stomach pumped and worked in the static, you can begin to work with a horizontal bar. Simply hang on it and begin to lift straight legs up to get a shot. If it fails, raise the knees bent legs, but with slowdowns.

You can also seek the assistance of parallel bars. Enough to gain a foothold on their hands or elbows and make upgrades to both legs. Three approaches for 12 times, that should be enough to load the press. After a few weeks of training on the horizontal bar and parallel bars, you can try to keep the area.

Often more people are struggling with pain that occurs in the upper thighs while keeping the area, rather than with pain in the abdomen. This is because much strain feet due to improper load distribution. It is enough to move the load on your lower back, leaning back slightly, the legs become more free. When performing exercises, ensure that the back was smooth.
Is the advice useful?
See also
Присоединяйтесь к нам
New advices