Who are the hare Krishnas

In Hinduism there are many gods, the most important of which are Brahma, Shiva and Vishnu. Hindus believe that one of the many incarnations of the God Vishnu – Krishna. The cult of Krishna in the twentieth century, has spread far beyond India and marked the beginning of the international movement of Krishna consciousness. 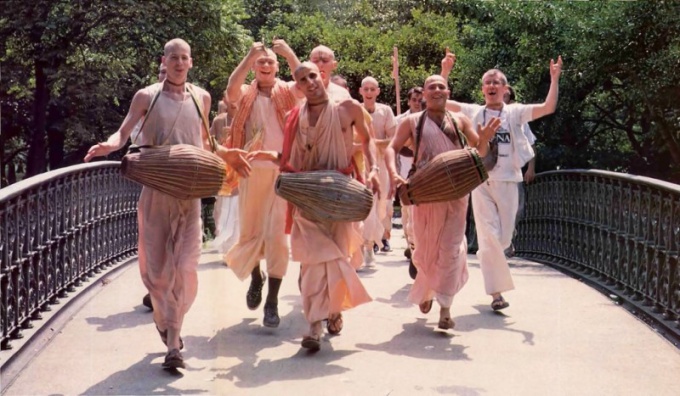 The teachings and traditions of the hare Krishna

Krishnas spread the doctrine according to which all people are part of the universal consciousness, which is God. Like most adherents of the Hindu cults, hare Krishna followers believe that there are numerous transformation of man, which consistently follow each other.

The hare Krishnas believe Krishna is the same God as the Jews recognize him, Christians and Muslims. Salvation comes to people through the divine Krishna consciousness. To join this mind, the adherents of this doctrine by tradition say chanting the name of Krishna. It is believed that this ritual is the touch of Krishna and a kind of offering sacrifices to him.

The appearance of Krishna immediately catches the eye: they wear bright clothes with Indian motifs. Men traditionally shaved head, sometimes leaving only a pigtail. Of particular importance in the life of Krishna is proper nutrition. As a rule, the true Krishnas are vegetarians. Every meal had a ritual significance, as is seen as a unity with deity.

Krishna is often seen in public places. Gathering in groups, they sing their songs, sell flowers and religious literature, and sometimes collect donations. Very common movement, hare Krishna in North America, where they constitute one of the many Hindu groups.

Since the early 70-ies of the last century the division of the so-called "International society of Krishna consciousness" began to operate in the Soviet Union and then in Russia. The adherents of this sect declare their adherence to the traditions of Hinduism, but experts believe the current teachings of the hare Krishna pagan.

The most ardent adherents of the hare Krishna society are convinced that salvation is guaranteed only to those who all his life devotes to Krishna, strictly observes the daily routine and strict nutrition rules. Deity worship is also expressed in the countless repetition of mantras, which often leads hare Krishna in ecstasy and is able to bring to full unconsciousness.

The Orthodox Church condemns the cult and traditions of Krishna, believing that this teaching brings out the hidden in the dark and demonic forces. Adherents of the Christian faith is not without reason to believe that the organization of the hare Krishnas – it's just one of many destructive sects, whose aim is the suppression of the individual and control over human consciousness.
Is the advice useful?
See also
Присоединяйтесь к нам
New advices