"Enterofuril" intestinal antiseptics, which treat diarrhea. Among similar drugs it features a powerful bactericidal action and minimum contraindications. It can give even a two-month babies. 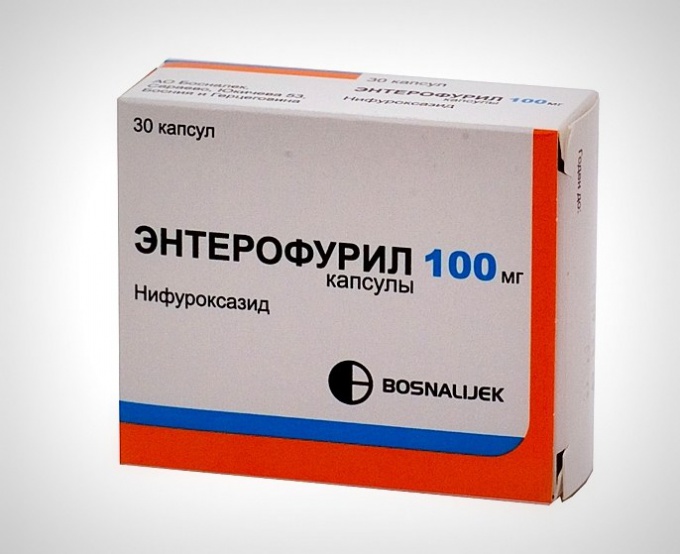 When diarrhea happens, it is difficult to immediately determine why he. The first thing that comes to mind is food poisoning. Indeed, more often it is stale, toxic food causes such a strong reaction.

But if the disorder is due to pathogenic microorganisms, it flows harder and longer. Some advise to take "Smectite", others – "Imodium", third – "Loperamide", "Enteral", "Enterofuril". It's all effective medicines, but they act in completely different ways. What to choose?

"Effective absorbent that it removes from the poisoned body of harmful substances. But it's useless if diarrhea is caused by salmonellosis or dysentery.

"Imodium" quickly soothes peristalsis. But they can't be treated for diarrhea due to antibiotics, dysentery, other intestinal infections, colitis, diverticulosis (the protrusions in the walls of the intestines, where the accumulated fecal mass).

"Loperamide" faster quiets peristalsis and effectively relieves the symptom of the disorder, but does not eliminate its cause. At suspicion on an intestinal infection its intake is contraindicated.

In the "Enteral" – a yeast-like fungi Saccharomyces. Trying to attach to the intestinal wall, these "colonizers" displace competitors – pathogens. But against some types of intestinal infections fungi are powerless. "Enterofuryl" spectrum bactericidal action is extremely wide.

He has significant benefits:
– "Enterofuril" – not an antibiotic, it does not destroy useful microflora;
– the drug is active against almost all intestinal infections, even resistant to many antibiotics;
– the therapeutic effect occurs fairly quickly;
– effect of the drug is limited only to the intestine;
– eliminating diarrhea, "Enterofuril" at the same time strengthens the immune system.

The drug is approved for breastfeeding, but is contraindicated in pregnant women, infants up to one month. Allergic reaction (urticaria) is rarely observed.

Infants up to two years capsules can not give – they produced a suspension with a pleasant smell and taste of banana. Before use, don't forget giving it a good shake.

To avoid dehydration, you should drink plenty of liquids. Strictly forbidden alcohol!

You can find the information that "Enterofuril" is dangerous because it is a derivative of nitrofurans. And they can provoke cancer. This information by anyone not scientifically confirmed. "Enterofuril" has been used for over half a century, and in the recommended doses, it proved itself as a safe drug.