What is the chemical formula of ethyl alcohol

Ethyl alcohol is a clear, colorless liquid with a characteristic odor. Its density is about 0.8 grams/cubic centimeter. What is the chemical formula of ethyl alcohol? 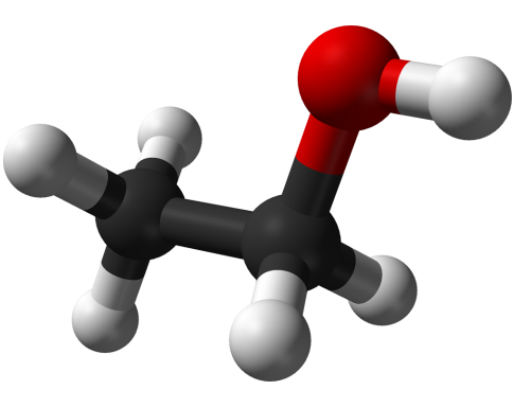 Related articles:
Ethyl alcohol ("ethanol", international chemical classification) is widely used in medicine, as a disinfectant, and in some industries as a solvent, a fuel, a component of antifreeze. In addition, ethanol is the main acting component of alcoholic beverages.

Why the structural formula of ethanol is not accurate enough

The formula of any chemical substance must contain information about how much and what kind of atoms contained in its molecule. Ethanol consists of three elements: carbon (C), hydrogen (H) and oxygen (O). Each ethanol molecule has 2 carbon atoms, 6 hydrogen atoms and 1 oxygen atom. Therefore, the empirical (simplest) formula of this chemical compound is written thus: С2Н6О. It would seem that this is enough.

However, the use of only one empirical formula may result in an error. The fact that the same formula С2Н6О applies to other stuff – preparing dimethyl ether, which under normal conditions in a gaseous state, not liquid, such as ethanol. And, of course, the chemical properties of this material also differ from the properties of ethyl alcohol.

Therefore, use only the empirical formula to describe ethanol is impossible.

What is the structural formula of ethanol

In these cases come to the aid of more accurate structural formulas, which contain information not only about the number and type of atoms of elements in a molecule but also their arrangement and mutual relations. The structural formula of ethanol is: C2H5OH, or even more precisely - CH3-CH2-OH. This formula indicates that a molecule of ethanol consists of two main parts: С2Н5 ethyl radical and the hydroxyl radical (often called a hydroxyl group), HE.

Using structural formulas, we can conclude about the chemical properties of the substance due to the presence in its composition of a highly active hydroxyl group in the side due to the oxygen atom of the second of the electronegativity (after fluorine) element, offset of the electronic density of the molecule.

For comparison structural formula mentioned dimethyl ether CH3-O-CH3. That is, it is a symmetrical molecule.