As you put your fork on the table: teeth up or down?

Rules of table etiquette is a delicate matter and not everyone knows in what order to properly lay out knives and forks. But the question of up or down teeth should lie fork, is rare. If the plug is not wrapped in a napkin, then put it on the table with the teeth upward. 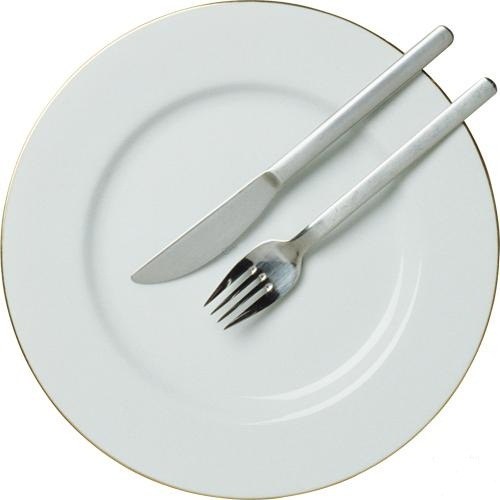 Where to turn teeth

A question on the fork teeth can indeed occur, as in modern restaurants and cafes, the table is not always served in advance in anticipation of guests. If all devices are prepared, and you sit down at a table where everything is already laid out, then plug definitely will lie with its teeth upward.

But if you come in a cafe, or just waited their turn on the table, then it often happens that the waiter cleaned the place just before you occupied it. Of course, he didn't have time to lay the table, perfectly correct putting forks and spoons in the correct order.

The plug is supposed to keep easily, using thumb and index finger lightly pressing it to the bent medium.

In this case, the devices often bring wrapped in a napkin. This is an indication that the fork and spoon are perfectly clean, and you can be sure of the hygiene of their meals. If the plug is wrapped in cloth, it can put up as teeth and down. Usually they do not see, we can only guess at the outlines of the convolution where there are teeth. It turns out that putting the fork teeth down on the table is admissible only in one case: if it is served wrapped in a napkin.

The use of the fork

Fork is typically used as the primary device for most dishes, except soups, spoon and knife act as support. But sometimes the plug acts as a supporting device. For example, if you need to cut a piece of meat, then take the fork in your left hand (right if you are left-handed, and in the future, any recommendations for left handed people need to read the other way around), and the knife in the right. Then cut a piece ratopariva elbows to the sides.

Then, too, you should act according to American or European styles. The American way implies that there is you will still be right hand. Put the knife on the edge of the plate, and then take the fork in your right hand, hold it to his mouth, teeth up. At the European way you can either continue gripping the knife in his right hand or not, but there would have to be left hand. Plug, while holding the teeth down.

In the simplest case, the fork is placed to the left of the dish and the spoon and knife on the right.

If you are divorced from food to conversation, putting the fork on the table, according to etiquette, it is impossible. It provides important, up or down teeth you will keep it. There are two styles: American and continental, or European. Etiquette in the American style the fork is held by its teeth upward, and in the case of following European norms – teeth down.

While you are completed the dish, do not put the fork on the table or on a plate. But if you still want for some reason to postpone a fork and eat later, then you can't put a dirty tool on the tablecloth. It is put on the edge of the plate, diagonally. The direction of the teeth in this case is not important. If you want the waiter replaced get a plate and Cutlery, put them on the edge of the plate parallel to, if you imagine the plate as the dial, the cuttings would be in 4 digits.
Is the advice useful?
See also
Присоединяйтесь к нам
New advices