How many beads must have rosary

World religions have their individual attributes. However, some accessories are the same and do not depend on creed. These include the rosary. They are present in many religions, slightly different in appearance, materials and number of beads. 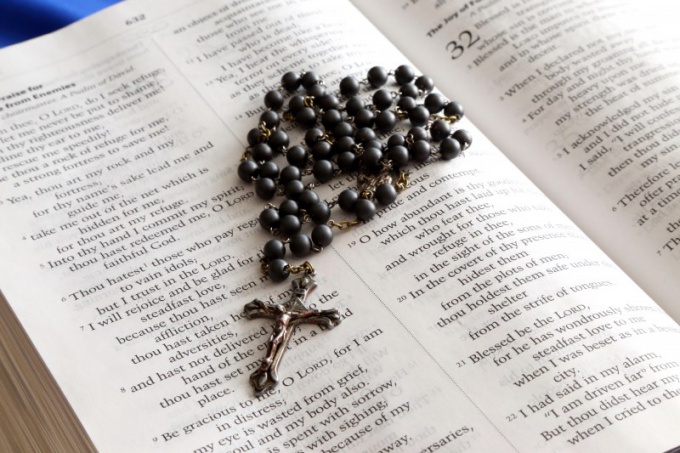 The purpose of the rosary

The beads represent beads strung on a ribbon/cord. Typically, the ends are bonded to each other, making the accessory resembles a decorative ornament. Beads or granules are made of different materials: wood (cypress, date, juniper, etc.), natural stones, pearls, ceramics, seeds, berries, etc..

The rosary is a special object that helps to maintain concentration and attention of the worshipper. Home to popular religious attribute is India. Since ancient times, the sorting out of stone helped to escape from worldly cares and pay attention to your inner, spiritual world. Beads beads often symbolize the number of spoken prayers.

It should be noted that the shuffling beads are characterized not only by religious adepts, but, for example, shamans in Central Asia. Using an accessory, they're wondering: predict harm or benefit.

Today beads are used in many religions. They can be found in Buddhism, Islam, Christianity, old believers, etc. to Distinguish the beads of one creed from another by number of beads and decoration.

How many beads in beads of various religions

The number of beads in a rosary varies depending on religion. For Orthodoxy, this number must be a multiple of 10. The most common rosary of 100 beads + 3 from the Central knot down. Used in Orthodoxy accessory ends with thread tassel, or a cross. It should be noted that the number of beads may vary. According to the rules, segments of 10 pieces can be from one to sixteen.

Another Christian doctrine – Catholicism – adopted a different amount of beads. Rosaries have 33 or 50 grains. The first digit symbolizes the earthly years of Jesus and the second the number of years from the date of his death to writing the first book about his life. Later in Catholicism appeared rosary contains 150 beads (or 15 dozen). Every ten – a tribute to the memory of the main event of the life of Christ and his Mother.

In Buddhism there is a rosary with 54 and 27 beads. This attribute is a ½ and a ¼ part from the classical 108-grained tape.

In Hinduism there are two types of beads. First "owned" Shiva and contain 64 or 32 beads, made from the berries of the Rudraksha. The second symbolize the deity absolute and have 108 seeds. According to the rules, the rosary with the sacred number of links needs to be made of wood of tulasi.

Islamic rosary has 99 beads. This number is cyclic and corresponds to the Divine names. Typically, the beads are divided into three equal parts. And there is a shortened version of the attribute called "Tasbeeh" and consisting of 33 beads.
Is the advice useful?
See also
Присоединяйтесь к нам
New advices