What are the sides of a right triangle

The amazing properties of right triangles people interested in antiquity. Many of these properties were described by Greek scientist Pythagoras. In Ancient Greece appeared, and the names of the sides of a right triangle. 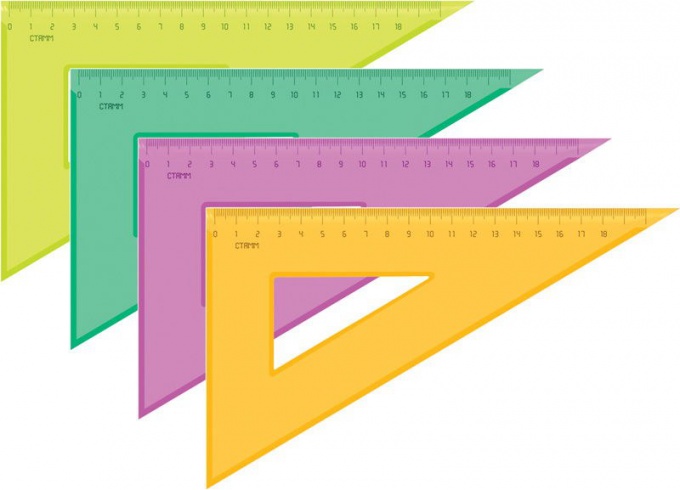 What kind of triangle is called rectangular?

There are several types of triangles. Some have all the angles acute, the other one obtuse and two acute, the third – two sharp and straight. On this basis, each type of these geometric figures and received a name: acute-angled, obtuse-angled and rectangular. That is, rectangle is a triangle whose one angle is 90°. There is another definition, similar to the first. Is called a rectangular triangle whose two sides are perpendicular.

The hypotenuse and the legs

At acute and obtuse triangles to segments connecting the vertices of the angles, referred to as " the parties. From the rectangular triangle the parties have other names. Those that are adjacent to the right angle are called the legs. Side opposite the right angle is called the hypotenuse. In Greek the word "hypotenuse" means "stretched", and "side" - perpendicular.

The ratio between the hypotenuse and the legs of

The sides of a right triangle are linked by defined relationships, which greatly facilitates calculations. For example, knowing the sizes of the other two sides, you can calculate the length of the hypotenuse. This ratio is named opened his math called Pythagorean theorem, and it looks like this:

The adjacent and opposite side

Draw a right triangle ACB. Letter C to denote a vertex of a right angle, and the vertices of the acute angles. The side opposite each corner, conveniently called a, b and C, by the names in front of them reclining angles. Consider the angle A. the Leg and for him to be the opposite, side b – yard. The ratio of the opposite leg to the hypotenuse is called the sine. To calculate the trigonometric function by the formula: sinA=a/c. The ratio of adjacent sides to the hypotenuse is called the cosine. It is calculated by the formula: cosA=b/c.

Thus, knowing the angle and one side, you can use the following formulas to calculate the other side. Trigonometric ratios are connected both sides. The ratio of opposite over adjacent to is called the tangent, and adjacent to the opposite – cotangent. To Express these relationships can be a formula tgA=a/b or ctgA=b/a.
Is the advice useful?
See also
Подписывайтесь на наш канал