The most famous modern artists

As a rule, most people are a little fond of their creative contemporaries, preferring artists of past centuries. A nodding acquaintance is only in the case of a unique event: the theft or discarding of painting/installation, creating new work from unexpected materials. However, modern artists do not lose heart and continue to create for the joy of itself and its fans, earning a considerable amount. 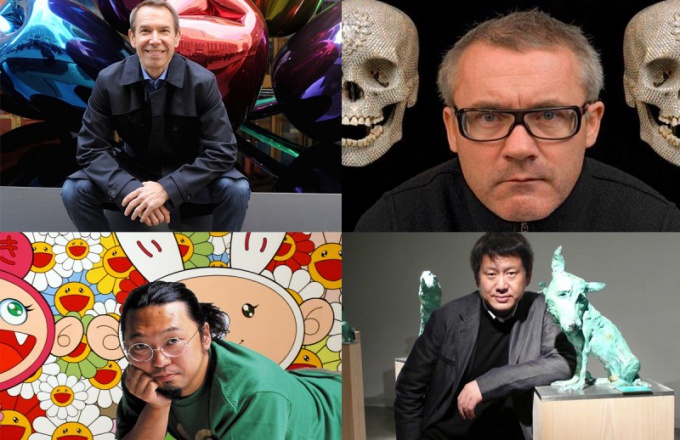 One of the most popular artists of our time is American Jeff Koons. Favorite style of the Creator of the kitsch. Bright colors, confusion, unusual materials and ideas – this has allowed Koons to acquire a wide popularity in 80-ies of the 20th century. Today the artist – President of a private Corporation, Jeff Koons, creates unusual sculptures. Most popular work: "figurines" full-length Michael Jackson with his monkey, covered with gold (sold for $5.6 million); "Heart" (bought at auction in 2007 for $23.6 million) and "Tulips" (also went under the hammer for $23.6 million).

One of the most fantastic series of the author - a giant sculpture created from elongated balloons. Bright dog, Balloon Flower 3, "Tulips" look easy. However, the weight of this sculpture can reach several tons.

Despite the high cost of the work of Koons, the richest contemporary artist is Damien Hirst from the UK. A Central theme in the work of God stands death. The most popular series that rocked the whole world, was Natural History. Hirst has pickled him in formaldehyde several dead animals: a Zebra, a cow, a shark, a sheep etc. For your need to play is inevitable, but unpleasant ending of the life, the artist was nicknamed "the singer of death."

One of the most expensive painters is Jasper Johns living in Connecticut, USA. In his works the Creator primarily uses bright, rich colors and simple images: letters, targets, flags, numbers, maps. Concerning the stylistic direction chosen by Jasper Johns, among researchers there is still no consensus. Some attribute it to pop art – neo-Dada.

East does not sleep

It should be noted that in the art world today is dominated by artists from Asian countries. Leading position in this respect is China. Several artists from China are included in the top ten most-most.

A leader among his countrymen was Zeng Fanzhi. Today the artist has departed from his characteristic expression of informed and focused on symbolism. Soft colors, total peace and relaxation of paintings made Fanchzhi one of the most popular Asian artists in the world.

The first exhibition of paintings by Zeng Fangchi outside China took place in 1993. But the record-breaking sums for his work, the artist began to receive relatively recently, in 2008, the painting "Mask Series No. 6" the Creator brought $9.7 million

The second most popular artist in the world from China is the Chou Cunha. Real world popularity the master brought the series "Green dog". Animals are different, poorly identifiable species captured in various emotional poses. According to the author, this "dog" is a symbol of the loneliness and uncertainty of the human condition in modern society. The total profit of sold works amounted to €23.9 million

Speaking of artists from the East, not to mention the Japanese Creator Takashi Murakami. Painter, designer and sculptor creates a very expressive, positive work, connecting them with real opposites: West and East, past and present, chaste and vulgar. In the West, the popularity of Murakami brought collaboration with Marc Jacobs - the Japanese worked on the design of the goods Louis Vuitton.
Is the advice useful?
Присоединяйтесь к нам
New advices