The harm of alcoholic cocktails blazer and alcohol?

Alcoholic cocktails are deservedly the most harmful products among alcohol beverages. Cocktails sold in bottles and cans ("blazer", "ALCO"), are composed of a large number of impurities harmful to the human body. 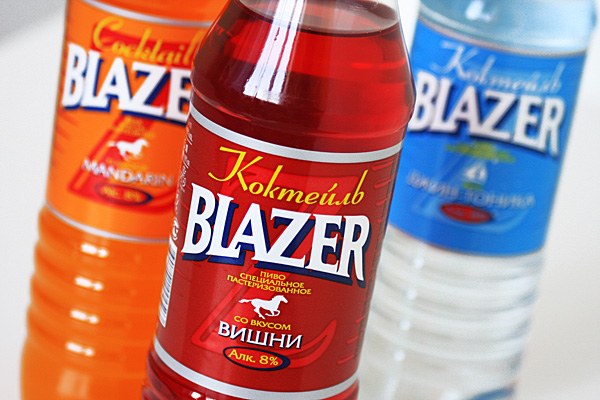 Related articles:
Russia ranks first in the world in the consumption of canned alcoholic drinks. Every third teenager periodically drink this type of alcoholic beverages, and nearly 30% of adults regularly consume drinks like "blazer", "ALCO", etc.

Getting used to such kind of beverage, it takes longer than with regular consumption of beer. However, the composition of such drinks is much more harmful than beer.

The amount of ethanol

The amount of ethanol in alcoholic cocktails cupping can reach a maximum of 13%, however, the "blazer" and "ALCO" these figures will vary between 8% and 12% (depending on type of drink). This amount of alcohol can be seen as great and to the fortress of wine. However, due to the additives and added substances causing the formation of gas in the beverage, drunk with such drinks is much faster, and the hangover is somewhat heavier, and the damage to the body to apply even more.

To attract consumers to purchase this drink, many manufacturers add chemical artificial flavoring which not only worsen the drink, but also adversely affect human health. Those additives make the drinks was widespread in teenagers, because instead of the smell of ethanol they have the taste of soda.

Cocktails sold in the banks, have nothing to do with drinks served in bars and restaurants.

So, in the drink "blazer" and "ALCO" contains extremely harmful sodium benzoate (E211), which adversely affects the liver and can be the cause of increase the likelihood of developing cancer and Parkinson's disease. This substance has a negative effect on the liver, impairing its ability to effectively filter alcohol, to prevent a lethal amount of a substance in the bloodstream. Colors and flavors also impairs the liver's ability to filter alcohol.

Alcoholic cocktails contain about 4-5 tablespoons of sugar in a jar that can also increase the risk of diabetes and deteriorating health in General.

In addition, alcoholic beverages contain caffeine, which, besides its tonic effect, causes serious addiction, especially when combined with alcohol. Caffeine also has a diuretic effect, which increases the load on the kidneys, causing adverse consequences of its consumption together with alcohol (e.g., kidney disease).
Is the advice useful?
Присоединяйтесь к нам
New advices