How to cook baked potatoes in foil

Baked potato in foil is very useful because with this method of cooking retains most of the contained vitamins and minerals. Baked potatoes will be more tasty if you add the filling. 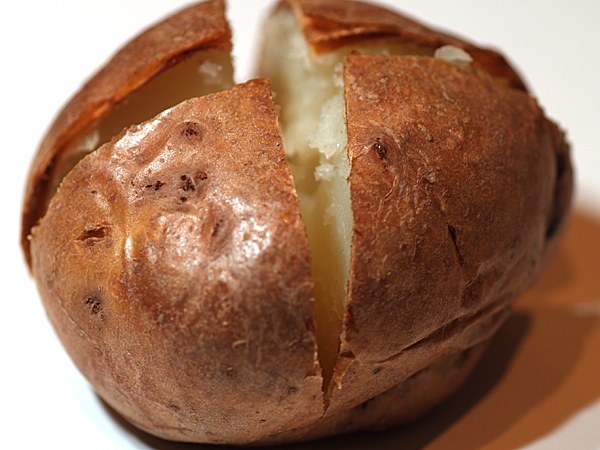 Related articles:
For roasting potatoes it is best to choose young tubers of medium size. Tubers should be undamaged. The most delicious and aromatic is the baked potato crisp varieties. Before baking the tubers should be well washed with a brush and dry.

A recipe for baked potatoes in foil

Make each potato crosswise incision. It needs to be deep enough so the potatoes are well cooked. However, the tuber should not fall apart. Pack each tuber in plastic foil and place on a baking sheet. Before wrapping in foil potatoes can be lubricated with vegetable oil — this will make the crust more crispy.

Baked in foil potatoes you can apply sour cream sauce. To do this, a glass of low-fat sour cream 1 teaspoon grated horseradish, finely chopped pickled cucumber and salt. Instead of sour cream you can use yogurt with no fillers, and instead of horseradish, grated on a fine grater garlic.

Baked potatoes in foil with fillings

Potatoes baked with different fillings: salted and smoked bacon, sauteed mushrooms, sauteed meat, cheese and ham. For baking 1 kg of potatoes, you will need 200 g of any minced filling.

Selected toppings you can put in potatoes in several ways. The easiest is to cut a potato in half and between the halves to put the stuffing. Then each tuber should be wrapped in foil.

Can also be done on top of the potatoes deep cross cuts. Only it is necessary not to damage the lower skin. Between the cuts, put the stuffing and wrap the potato with foil.

In addition, you can use a special kitchen appliance to remove the core. Cut with the help of the device hole in the potato and put in a filling. Wrap potatoes in foil.

Baked potatoes stuffed with the same as regular potatoes: 50-60 minutes in a preheated 200oC oven. After the specified time, expand the foil and put the pan in the oven for another 5-10 minutes so the potatoes have formed a delicious crust.
Is the advice useful?
See also
Присоединяйтесь к нам
New advices