How to sew a denim jumpsuit on the boy

Denim style truly versatile. Jeans happy are children and youth, and the elderly. Quite often in the house accumulates a certain number of old pants and jackets which wear already indecently, and throw a pity. From mom's or dad's old jeans can be made, for example, overalls for her son or a sundress for my daughter. 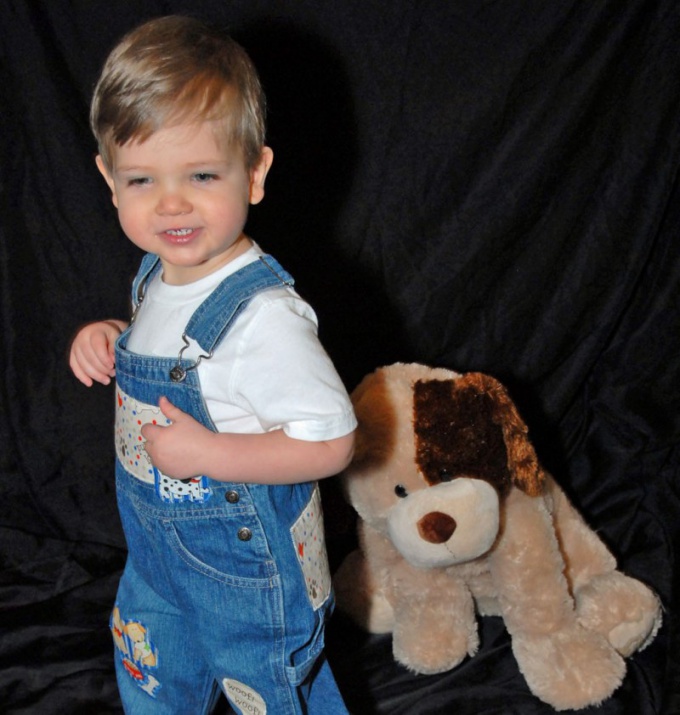 Related articles:
Of course, you can sew a denim Romper for boy and new fabric, good to buy it in a specialty store is not the problem. But the fabric in the store sometimes are more expensive than ready to wear. Alter old adult jeans, you will get a stylish outfit for your little one is actually free. Besides you can use some details which are quite difficult to handle is the pockets, belt, etc.

To sew denim overalls for a boy, you will need:
- old, but the whole jeans;
pattern children's pants:
- long metal ruler;
- a tailor's square;
- a piece of cardboard;
- iron
- sewing accessories;
- accessories.

Washed jeans neatly strut. Fabric iron. Carefully Ironing is not required, but the fabric surface should be smooth. Belt and patch pockets not ratatoiulle.

Make pattern. If there is no suitable log, disposal of old but suitable for size pants, preferably without his pants (e.g., pajama). Pattern the top part of the jumpsuit is a rectangle. Vertical side equal to the distance from the waist to the chest or just above horizontal – at your discretion. Square better to first cut out of thin cardboard, and then transferred to the fabric, adding on each side a recess at 3 cm.

The Trouser cut it out from the lower part of the adult pants. If the jeans at the bottom is not frayed, the ACC can be left. Take the breast from the upper part of the front. It may also consist of two parts, because from the top you will sew the pocket. The belt cut a piece equal to the waist, plus 3-4 cm at the clasp. To cut better on the side where the hinge.

It is better to apply the same seam, which usually sew jeans. It is very similar to linen. Align the sections of the side seam so that the seam allowance back performed at 0.5 cm Sweeping away the seam and sostrochite on the reverse side. Zautyuzhte allowance on the front side in the direction of the front, bend the protruding part, baste and pristrochite. Thread is better to take cotton, the same color as the line that you decided to keep. Baste and sew the second side seam, then in a similar way – step. On one of the side seams, leave an unterminated plot of 5-6 cm, which will be adjacent to the belt. If there is a short zipper, you can sew it there. In the absence of zipper sew 1-2 small buttons to the back half and the front part treat the Welt loop.

You got the two halves of the pants. To sew them together, you need one to turn inside out, and the second to write on the front side. Mate the first insert to the allowance of the same part performed at 0.5 cm Sweeps halves and sostrochite first on the reverse side, and then, as in the connection of the side seams, zautyuzhte allowances on one side, fold and pristrochite. Sew waistband, pre-treating the cut edge.

The breast can be made in two ways – sew the bottom part to the belt or to make detachable. In any case zautyuzhte allowances to wrong side, fold them inward and astrocyte. Sew a patch pocket in the middle and at the top corners of the buttons. If the breast is folding, make the bottom 2 Welt loop, a belt sew buttons. And you can sew it to the belt just above the line of bending. Better, of course, pristroit according to the ACC, but not every car will take the fabric that thick.

Take 2 straps. Fold them in half lengthwise, right side out. Allowances inside the fold and zautyuzhte. Will astrocyte seams. Make finishing line and parallel to the fold line. Sew the back straps to the belt. At the free end make a Welt loop.
Is the advice useful?
See also
Присоединяйтесь к нам
New advices